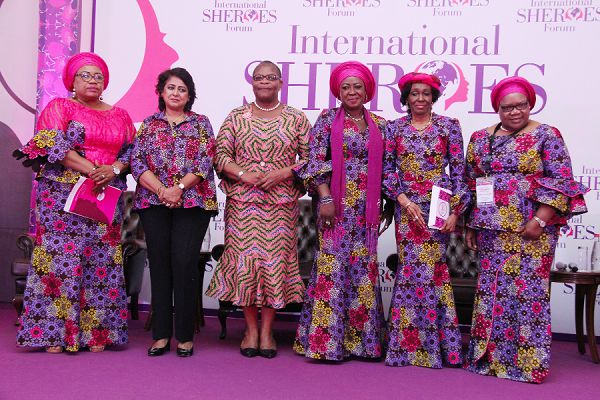 The International SHEROES Forum, created by the SHEROES Foundation, believes that women’s experiences, expertise and vision are essential for achieving sustainable political, social and economic advancements.

The just-ended 8th edition of the forum in Accra, on the theme: "Setting New Paradigms for Women's Leadership in Africa", was held from May 16 to 18.

It brought together female leaders who have made achievements in their various fields of endeavour, and unique speakers and panelists with great experiences and ability to inspire, through their presentations and stories and to discuss perspectives to key issues facing women.

In her address, a former First Lady, Nana Konadu Agyeman-Rawlings, stressed the need for women to upgrade themselves and contribute to the development of the nation and added that the adage that the women's place was at the kitchen was a fallacy and women should take up the mantle of leadership and reject criticisms that would shelve their dreams.

Mrs Agyeman-Rawlings described women’s participation in governance as low, calling on women to support each other and equip themselves with the needed skills to climb the ladder to the success, regardless of the opposition and challenges.

She said, “I faced tough time with my opponents during my campaign time but that didn't scare me as a women, I urge all of you (women) to rise up and push the agenda of women’s involvement in decision-making process.”

For her part, Mrs Osei-Opare urged women to explore various avenues, including agribusiness to equip themselves to create employment opportunities to curb poverty and unemployment in the country.

She said that would help them to be involved in decision-making, especially on issues concerning women because their decisions would affect other women in the country.

Mrs Osei-Opare pointed out that women’s empowerment should not be seen only in the political arena, but also in the business field and suggested that “this journey to the top can begin in second cycle institutions where girls should be given certain positions.”

Dr Ezekwesili urged African women to play productive roles in the nation-building process and use their voices as instruments to effect changes in society and added that “we must use our voice to cause a change and upgrade ourselves to have access to opportunities.”

African women, Dr Ezekwesili said were proving to be great leaders and amazing role models to the younger generation, saying “we want to showcase that to the world, it is my hope that the special roles women play in Africa's progressive transformation will be acknowledged and appreciated.”

The main speaker, Dr Gurib-Fakim, advocated for policy interventions to support women empowerment and added that “women continue to be vulnerable instead of being celebrated for their achievement in society.”

Dr Gurib-Fakim expressed disappointed that women in most institutions were seen as subordinates and urged women to disabuse their minds of being inferior to men.

She encouraged women to work hard to change that wrong perception.