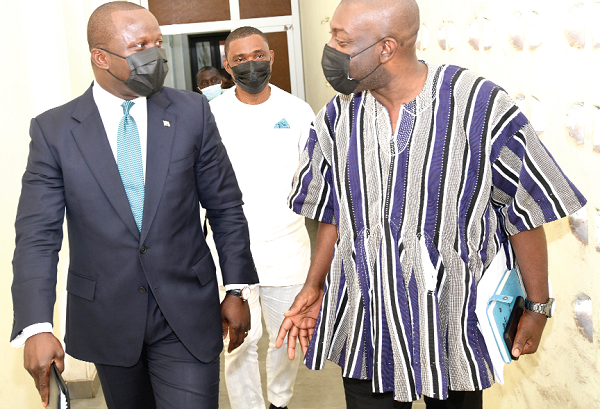 The Minister of Lands and Natural Resources, Mr Samuel Abu Jinapor, has said the government has embarked on a drive to reform land administration in the country, including digitalisation, to promote efficiency in the sector.

According to him, the measure would also ensure that people are able to access their land records in the comfort of their homes through the use of mobile phones and other such gadgets.

Taking his turn at the Ministry of Information’s press briefing series in Accra yesterday, the minister said the digitally driven initiatives by the government would remove bottlenecks which served as impediments to a smooth land administration system in the country.

“We are going to take an inventory and register all public lands in the country. We are going to do it in such a way that people will be able to identify state lands,” he said.

Mr Jinapor said in line with the dictates of the new Lands Act, the ministry and other relevant agencies were working on recommendations for the “‘de-vesting of vested lands”.

“We are taking far-reaching measures on land administration in the country. For instance, since 1974, Ghana has had no spatial marking. We do not even have the contours of landed property; so the commission itself does not have records of various lands across the country. The implications of these are enormous.

“The Vice-President chaired a meeting on digitising the economy and it became apparent that if we are not able to digitise the records of the commission, we will not have proper spatial mapping which is fit for purpose. So this is one of the things we are seeking to do,” he added.

According to him, the government owed the country a “fiduciary duty” to protect lands for future generations and advised staff of the commission to discharge their duties in line with the mandate of their office.

The Executive Secretary of the Lands Commission, Mr Ebenezer James Dadson, said as part of the government's policy to ‘de-vest’ vested lands, the commission had constituted a technical committee to take stock of the status of vested lands in all parts of the country.

"A ministerial committee will review the commission's report and submit its recommendations to the Presidency for action," he said.

Mr Dadson also said the commission was focused on decentralising land administration services across the country.

He said as part of the decentralisation process, the commission had successfully decoupled and scanned land records of all the newly created regions from their parent regions, while financial and logistical needs had also been finalised for the establishment of new regional offices.