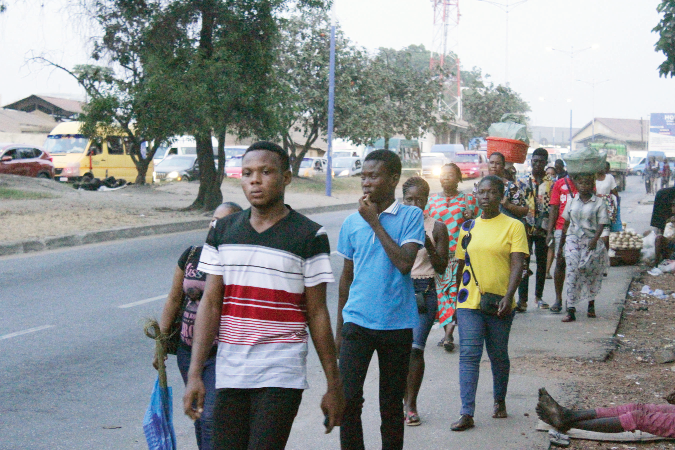 All major roads leading to the central business district (CBD) of Accra are choked with a long winding gridlock, as well as human activities, as people troop to the city centre to either buy or sell in preparation for the Christmas festivities.

The situation gets so bad that some passengers, particularly those commuting in public transport, are compelled to abandon the vehicles and make the rest of their journeys on foot.

Those who are unable to travel on foot resort to the services of motorbikes, popularly referred to as Okada, as means of transport, despite the services being banned and the police every now and then stopping the motorbikes.

The most affected routes are the Kwame Nkrumah Avenue (from the Kwame Nkrumah Interchange to the CBD), the K.A. Busia Highway (Mallam-Kaneshie), the N4 (Ayi- Mensah through to Madina to the Tetteh Quarshie Interchange) through to the Independence (Liberation) Avenue (from the Tetteh Quarshie Interchange to Accra) the George Bush Highway (From Dzorwulu Junction to Accra Mall) and the J.E.A. Atta Mills High Street, linking up to the street in front of the new court complex, near the Ministries.

In its last Tuesday issue, the Daily Graphic had reported that there was an influx of goods in the CBD, as well as human traffic, but low patronage of those goods.

According to the story, there were busy activities in the CDB, as traders and hawkers had taken over pavements and pedestrian walkways, while prospective shoppers had also flocked the area, hoping to get items on their shopping lists, a situation that had created vehicular and human traffic.

The paper further reported that the police had scaled up their presence within the city and beefed up security to protect lives and properties around the Christmas period.

The Daily Graphic’s Juliet Akyaa Safo, Joshua Bediako Koomson, Dickson Worlanyo Dotse and Elizabeth Konadu-Boakye went round the capital city, especially the routes leading to the CBD, and observed that as early as 6 a.m., the traffic built up on most of the roads, particularly on the N4, which holds commuters travelling to Accra from Koforidua using the Akuapem Ridge, and the Kwame Nkrumah Avenue, which seems to be the converging point for all coming from the various areas to the CBD.

It was seen that as the traffic built up, it became gridlocked, to the point that some commuters were forced to alight along the way to escape the unbearable heat in the vehicles.

The situation had also compelled some drivers to charge exorbitantly to compensate for the time they spent in traffic.

Some drivers have adopted the strategy of travelling short destinations instead to make more money.

For instance, on the Accra-Kaneshie-Kasoa route, they load from Accra to Kaneshie, then to the Mallam Junction, before continuing to Kasoa, and along all those routes, they charge something extra from what is usually charged.

A similar situation pans out on the N4, particularly from Accra to Adenta and its environs, where the drivers first load to Madina, before continuing to the other areas.

Although passengers complain about having to pay more than they would usually spend on transport, they have no choice, as their refusal to board the vehicles could leave them stranded.

Around this time, the traffic situation in Accra becomes worse because many traders from other regions travel to Accra to buy items to stock up for the occasion to meet the expected patronage.

Also, some traders who ordinarily do not go to the CBD take advantage the festive occasion to go there to engage in temporary business.

Some traders and shoppers also rush to town to enjoy mouth-watering discounts, while others also make the journey to the CBD to complete their last-hour activities.

In a bid to beat the traffic, some recalcitrant commercial drivers have resorted to driving on the shoulders of the roads.

However, given the mounted security cameras and the presence of policemen, some have been brought to book.

Although gridlock is an inconvenience, most passengers endure it, as they have no option.

“This has become an annual ritual, but this year’s has been the worst in recent times. I am sure that by Friday, when workers would have received their salaries and ready for their last-minute shopping, the situation could even be worse,” Naa Korkor Adjei, a trader, said.

Paul Atiogbe, a passenger, also observed that private vehicles were not moving mainly because of the trotro drivers who kept cutting in.

He pleaded that the policemen should be around to direct traffic.

A driver complained that he had been in the traffic for close to one and a half hours.

“We are from Adjen Kotoku, but the traffic is really intensive here on the Graphic Road. Being stuck at one place has really taken a toll on our fuel,” he added

Agya Appiah, another driver, who was from Dome, explained that while the traffic was manageable from the Achimota area, the situation got worse on the Kwame Nkrumah Avenue.

He commended the Motor Traffic and Transport Directorate (MTTD) for its efforts in directing the traffic and urged the government to drive away the traders who were selling on the street, as they were a part of the problem.

A commercial driver, Mr Samuel Asiedu, who plies between the Nkrumah Interchange and the CBD, said the situation had become frustrating not just for drivers but also commuters.

“Passengers, particularly those who have to be at work at a certain time, get frustrated because the situation makes them run late. For us, we are unable to make good sales because we are unable to do many trips.

“On most days, I make about six trips in a day, but at the moment, I’m lucky to be able to do three due to the traffic situation,” he said.

To beat traffic, some commuters have resorted to the use of Okada.

However, the riders complain that their efforts are being thwarted by the police.

An Okada rider who only gave his name as Haruna admitted that the situation had become a cash cow for him and his colleagues.

“Just this morning alone I’ve been able to make seven rides, while previously I could only make about five rides the whole day. Although this traffic situation is bad, it has boosted our business.

“In times like this, the police also harass us because they know we are making money. So I try my best to use routes that can help me avoid them,” he added.

Haruna said most of the passengers asked them to take them to the Ministries area, Makola, Tudu and Kantamanto and also out of those areas to particularly the Kwame Nkrumah Interchange.

Another rider, Nii Teiko Lomo, said he expected the police to understand that the situation required their services and should rather encourage them to ride safe, instead of harassing them.

“In such bad traffic, it is the motor that gets people to beat it and get to their destinations on time, so instead of harassing us, the police should rather encourage us to ride safely,” he said.

In the midst of the gridlock, city authorities are also taking steps to make it safe and secure for people to go about their activities.

The Chief Executive of the Korle Klottey Municipal Assembly (KoKMA), Mr Samuel Adjei Tawiah, said the assembly had deployed enough security men to control human and vehicular traffic within the municipality during the festive season.

“We know there will be a lot of traffic during Christmas, so we have put enough measures in place to ease movement and keep the municipality safe,” he said.

He also told the Daily Graphic that the Municipal Security Council (MUSEC) had stationed security men at vantage points to control the activities of traders within the municipality.

“We had a MUSEC meeting on Monday, December 20 to team up with the police to keep the municipality safe during the festive season. In terms of sanitation, we will intensify the Operation Clean Your Frontage and surroundings at the CBD and the Kwame Nkrumah Interchange,” Mr Tawiah added.

From the twin-city of Sekondi-Takoradi, Dotsey Koblah Aklorbortu reports that the traffic situation is getting draggy, owing to the Christmas festivities and festival masquerades which are receiving heavy patronage from new arrivals.

Currently, vehicular movement has become a challenge, most especially after the closure of the Nkrumah Roundabout to pave way for the construction of the three-tier interchange and the reconstruction of the Market circle, which are currently ongoing.

Vehicular movement has been limited to some streets, while flatbed trucks and other trailers are not permitted at some parts of the metropolis.

On-street trading activities have resurrected, as hawkers displaced at the central market as a result of the reconstruction of the market circle have taken over the streets.

Floating drivers, taxi and mini-bus drivers have suddenly created illegal bus stops and passengers are ready to patronise those stations.

As a result, the Sekondi-Takoradi Metropolitan Assembly, in collaboration with the Ghana Private Road Transport Union (GPRTU), last Wednesday put together a joint task force to arrest commercial vehicle drivers loading and alighting passengers at unauthorised locations in the metropolis.

The MTTD has, as a result of the current situation, deployed its traffic officers to control traffic, while other policemen are positioned across the metropolis.