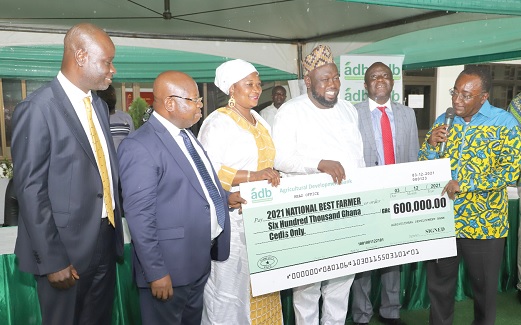 The Agricultural Development Bank (ADB) has presented the 2021 National Best Farmer, Alhaji Mashud Mohammed, with his prize money of GHc600,000.

Receiving his award, Alhaji Mohammed, 44, said he would reinvest the money in his farm activities, particularly, broiler production, so that he would be able to create employment opportunities for young people.

He stressed that it was important for those already in the agricultural sector to make deliberate efforts to woo the youth into it, as that would not only provide a secure form of employment but also help in the security and sustenance of the sector.

“It is an irony that we have the resources, but because of how farming is perceived, we talk about youth unemployment. I want to use my prize to expand and create job opportunities for the youth and, through that, let them understand that being in the agricultural sector is a dignified, more secure form of employment,” Alhaji Mohammed told the Daily Graphic.

The brief presentation ceremony, held in Accra last Wednesday, had the Minister of Food and Agriculture, Dr Owusu Afriyie Akoto; his deputy in charge of Crops, Yaw Frimpong Addo, and other ministry officials in attendance.

Also present were the Managing Director of the ADB, Dr John Kofi Mensah, and his team, as well as some family members of Alhaji Mohammed, including his wife.

Dr Akoto said the prize was a testament to Alhaji Mohammed’s hard work of engaging in the ministry’s flagship initiative, Planting for Food and Jobs (PFJ).

He intimated that there were many farmers, as well as non-farmers, who had had their lives transformed after participating in the initiative.

While admitting that there were still some challenges with the intervention, he said the interest of farmers in the PFJ kept growing and the government was encouraged by that to pursue its goal for the agricultural sector.

The minister also said thanks to the policy, Ghana was able to mitigate the fears of food shortages as posed by both the fall army warm infestation and the coronavirus disease (COVID-19) pandemic.

“Ghana stood very firm and we still continue to be a net exporter of food to our neighbours,” he emphasised.

He, therefore, allayed the concerns and fears over food shortage due to Russia’s invasion of Ukraine, saying: “There is no need for anybody to panic; we will come out of it, just as we did with the COVID-19 and the fall armyworm.”

Dr Akoto used the occasion to appeal to commercial banks to invest in local commercial farmers, encouraging the banks to partner with farmers and the government to further strengthen the agricultural sector as the backbone of the economy.

He said the support of the banks would help in the expansion of the sector, and that would help create more wealth through the creation of more jobs.

“Look at the sector again. If, previously, there were prejudices against agriculture because of the high risk, now we have opened it up; there are huge areas in agribusiness and value chain development.

“It is important for the commercial banks to invest in the sector to inspire confidence in it, attract more young people into it and, by so doing, create more job opportunities and wealth,” the minister explained.

Dr Mensah gave an assurance that the bank would continue to support the government to reward gallant farmers and fishers.

“We remain committed to ensuring that the agricultural sector continues to play its critical role in the national economy,” he said

He highlighted the projects the bank had partnered the government to implement, of which the PFJ was among.

He, however, acknowledged the problems in the sector, saying the bank was aware of the challenges facing the poultry sector, and assured the country that there was a planned collaboration with MoFA and other stakeholders to address and strengthen the sector.

The 2021 National Best Farmer expressed his heartfelt gratitude to the ADB and the government for their generosity and continued support that enabled him to attain his feat.

Alhaji Mohammed acknowledged the fact that there were challenges with securing fertiliser, but remained confident that with the help of the government and the fertiliser companies, measures would be put in place to counter the situation.