200 African Americans to get Ghanaian citizenship 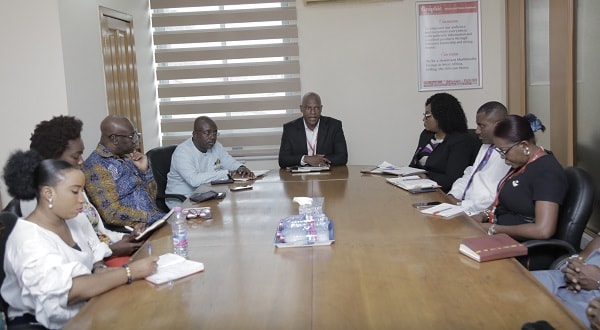 Mr Ato Afful (head of table), MD, GCGL, addressing the GTA delegation when it paid a courtesy call on him at the GCGL Head Office in Accra.
30.5k Shares

The President, Nana Addo Dankwa Akufo-Addo, will grant Ghanaian citizenship to more than 200 members of the African-American-Caribbean Diaspora community residing in the country.

The conferment of citizenship will take place next month.

The Director of Diasporan Affairs at the Office of the President, Mr Akwesi Awua-Ababio, who is also the Chairman of the Year of Return Steering Committee, made this known in an interview with the Daily Graphic when the leadership of the Ghana Tourism Authority (GTA) paid a courtesy call on the Managing Director of the Graphic Communications Group Limited (GCGL), Mr Ato Afful, and other management members of the company.

A similar conferment took place in 2016 when 34 Diasporans were given Ghanaian citizenship under the then President John Dramani Mahama.

Mr Awua-Ababio explained that it was the prerogative of the President to confer citizenship on persons who were not citizens by birth, as enshrined in the Constitution.

According to him, the decision to grant citizenship to the African-American-Caribbean community formed part of the celebration of the Year of Return.

He said the celebration was very dear to the President because it had the potential to place Ghana high on the international map.

The meeting was to dialogue and deliberate on how to strengthen the partnership between the two bodies to promote the Year of Return and sensitise Ghanaians to the celebration.

President Nana Akufo-Addo, in September 2018, declared 2019 ‘The Year of Return’, a celebration of African resilience and to commemorate 400 years since the first Black slave reached the shores of the new world, United States of America.

The celebration is also to reach out to the descendants of those Africans who were forcibly removed from their homeland and taken into slavery.

At the meeting, the Chief Executive Officer of the GTA, Mr Akwasi Agyeman, indicated that the celebration had been well publicised on the international front, attracting a number of Diasporans.

While the celebration would attract more foreigners into the country, he said, more publicity on it would convince the business community to align itself with the activities planned for the celebration.

Mr Agyeman further indicated that as part of the celebration a number of activities, including PANAFEST, had been outlined to take place from next month until the end of the year to climax the celebration.

To promote the activities and position Ghana well on the international front, he said, the GTA needed to collaborate with the media to broadcast the event to the public.

He, therefore, called on the GCGL to support the GTA to make the celebration of the Year of Return a success, as well as promote the tourism industry in general.

While expressing gratitude to the GCGL for its immense support to the tourism industry, Mr Agyeman said more needed to be done to enhance the country’s tourism sector.

We are ready to support

Mr Ato Afful, for his part, said tourism was very critical to the economic development of the country, considering the revenue it would generate when given the needed attention.

He expressed the GCGL’s readiness and commitment to support the celebration to make it a success but urged the management of GTA to “leave their doors open” to allow free flow of information for publication.

“Give us the needed information when we come knocking at your door, so that we can work together to drive the audience,” he said.

The Director of News at the GCGL, Mrs Mavis Kitcher, said the role of the company was to support the developmental agenda of the government and so such programmes fell within that mandate.

She also underscored the need for information to be forthcoming to ensure that the objective of the cooperation was achieved.

Mrs Kitcher, however, expressed concern about the high prices of hotels in the country, especially the four and five-Star hotels, saying: “You are asking people to visit the country but the prices of these hotels are very expensive and need to be looked at.”

The Director of Marketing of the GCGL, Mr Franklin Sowa, recalled how the company was already working to promote tourism in the country.

He said its platforms had the potential to draw the audiences needed to participate in the various activities, saying both Graphic Showbiz and The Mirror were already promoting the sector in their publications.

He said domestic tourism had a lot of potential that could be promoted to generate high returns for the government and added that the GCGL was using its Junior Graphic platform to introduce vacation tours for students to visit the various tourist sites.

Reacting to the high hotel prices, Mr Agyeman said the management of the various hotels were paying about 22 different taxes at a go, hence the high prices.

However, he said, the authority was working with Parliament to see how to reduce the tax incidence on hotels to drive down prices.