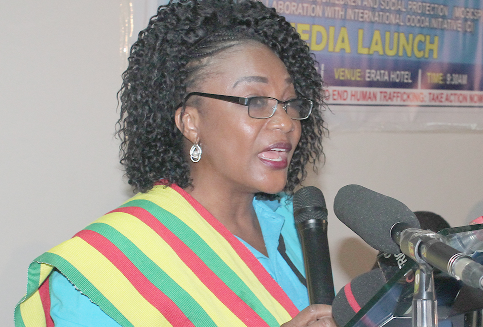 A programme has been launched in Accra as part of activities marking the World Day Against Trafficking in Persons – Blue Day, with a call on the government and other stakeholders to help fight human trafficking, especially that of children.

The call was made by the Minister of Gender, Children and Social Protection (MOGCSP), Ms Otiko Afisa Djaba, during the press launch of the event held in Accra last Tuesday.

The United Nations has scheduled July 30 of every year as the World Day against Trafficking in Persons which is also called Blue Day with the symbol of the blue heart to show compassion for victims of trafficking.

She said in 2010, the United Nations General Assembly adopted the Global Plan of Action to Combat Trafficking in Persons (TIP) and also urged governments worldwide to take coordinated and consistent measures to fight the menace of human trafficking.

“In Ghana, internal trafficking, particularly of children, is more prevalent than external trafficking though there are also cases of women being trafficked to Europe, America and the Gulf States,” she noted.

Ms Djaba mentioned that some of the traffickers and unlicensed recruitment agencies, unfortunately, used the media to defraud vulnerable women, men and parents and stressed that the ministry was, therefore, appealing to the media to support the fight against the social menace.

The minister cautioned the media to be vigilant and do some background checks whenever people approached them to advertise programmes and products on their platforms.

“The ministry is also calling on the media as one of our important partners to help us put the issues of human and child trafficking and irregular migration on the front burner,” she pleaded.

For his part, the Director of Administration at the Criminal Investigations Department (CID), Assistant Commissioner of Police (ACP) Isaac Quist, said the Anti-Human Trafficking Unit had undertaken a nationwide sensitisation programme to educate the general public on the modus operandi of perpetrators of human trafficking offences.

He added that the outfit received and investigated cases of human trafficking and arraigned the perpetrators with the help of other stakeholders such as the Department of Social Welfare and MoGCSP and indicated that the effort led to the rescue of the victims, while the offenders were prosecuted.