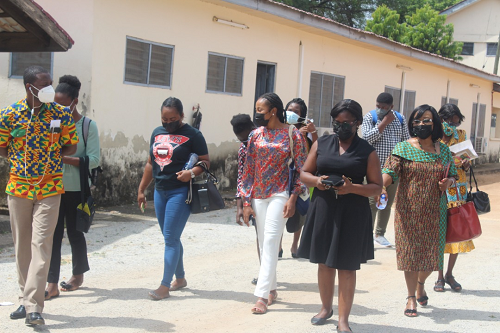 A team of health journalists from the African Media and Malaria Research Network touring Navrongo Health Research Centre (NHRC) with some officials from NHRC. Follow @Graphicgh

Civil Society Organisations (CSOs) in the country are joining forces with other international non-governmental organisations (NGOs) and advocacy networks to launch the “March to Kigali” campaign in Ghana tomorrow, Thursday, April 7, 2022.

The “March to Kigali” campaign seeks to promote an integrated approach to advocating for the elimination of Neglected Tropical Diseases (NTDs) and malaria in Africa.

The “March to Kigali” campaign was launched in April 2021, in the context of the build-up to the summit on NTDs and malaria on the eve of the Commonwealth Heads of Government Meeting (CHOGM) in Kigali, Rwanda, which provided a unique opportunity to further garner global attention and accelerate action to end these preventable and treatable diseases.

While this summit has been postponed due to COVID-19, the “March to Kigali” campaign builds on the existing partnerships and platforms of the “No to NTDs” and “Zero Malaria Starts with Me” campaigns and aims to secure commitments from regional, national and sub-national stakeholders to end these epidemics by 2030, as part of the Sustainable Development Goals (SDGs).

The campaign is being led by a group of like-minded CSOs in Francophone and Anglophone African nations.

Among the specific objectives of the campaign include the need to create a groundswell of support for increased action by the CSO community in NTD and malaria prevention and management education; to invite organisations to sign the call-to-action and commit to rolling-out the campaign nationally; and to sustain public knowledge and practice in malaria prevention at all levels—national, regional and community.

While NTDs and malaria are entirely preventable and treatable diseases, they continue to be a major obstacle to economic and social development in Africa, affecting the most marginalised populations.

Various international declarations and roadmaps have demonstrated a revived political interest in tackling malaria and NTDs.

Speak Up Africa, a not-for-profit advocacy and policy action tank based in Dakar, Senegal, is one of the international CSOs leading the campaign. Speak Up Africa dedicates its work to catalyzing leadership, enabling policy change, and increasing awareness for sustainable development in Africa.

In Ghana, for instance, the African Media and Malaria Research Network (AMMREN), a network of African journalists and scientists working together to reduce the burden of malaria, is partnering the National Malaria Control Programme (NMCP) and the Neglected Tropical Diseases (NTDs) Programme in the organisation of the launch of the March to Kigali Campaign in Ghana.