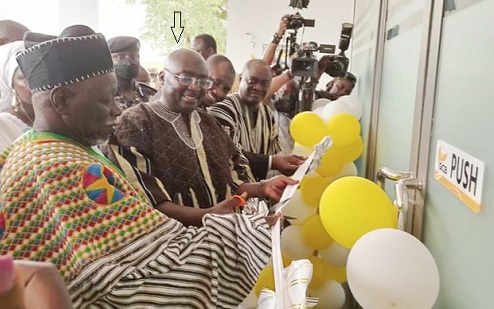 Dr Mahamudu Bawumia (arrowed) being assisted by Mba Tarana (left), Representative of the Overlord of Mamprugu, and management of the GCB Bank to inaugurate the Nalerigu branch Follow @Graphicgh

The GCB Bank has opened its first branch in Nalerigu, the North East regional capital, to serve the people of the town and the entire region.

The new branch is also the first commercial bank of any brand to be opened in the regional capital following the creation of the six new regions in 2018.

It is the 20th branch in the northern sector and the 185th nationwide.

The Vice-President, Dr Mahamudu Bawumia, joined the management of the bank to inaugurate the new branch in Nalerigu last Tuesday as part of his tour of the region.

Dr Bawumia described the opening of the new branch as historic and an exciting moment for the people, saying it marked the first commercial bank in the regional capital.

As a new region, he said, the bank would offer petty traders and farmers in and around communities in Nalerigu closer access to financial inclusion and solutions.

“With this initiative to create six new regions, which included the North East Region, we have not just expanded development, but also created some sense of nationalism and inclusiveness.

“The six regional coordinating councils are only working to ensure development at the local level, and this new GCB Bank is a direct beneficiary of the creation of the North East Region,” Dr Bawumia said.

He, however, appealed to the management of the bank to open branches in districts that did not have banks such as Chereponi to address the financial service needs of the people.

The Deputy Managing Director of the GCB Bank in charge of Operations, Emmanuel Odartey Lamptey, said the opening of the new branch was in line with the bank’s commitment to provide convenient and competitive banking products and services to their clients, including micro and small enterprises, retail traders, small and marginal farmers, as well as private and public sector organisations.

“GCB Bank remains the largest bank in Ghana, and it is well capitalised. Our strong performance over the years has been supported by our large branch network and customer base across the country.

“Our branches are positioned for personalised services, and this is complemented by our unique digital solutions to bring innovative offerings, convenient and competitive products to our clients,” he noted.

He expressed the bank’s commitment to provide excellent services to the people and called on all to patronise their services.