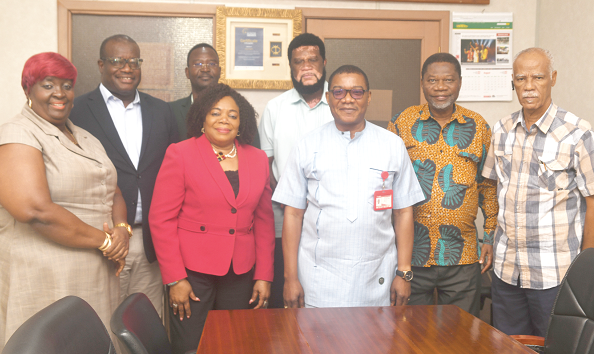 Kobby Asmah (middle), Editor, Graphic with Sylvester Parker-Allotey (2nd from right), Head of Communication and Protocol, Justice Julia Naa Yarley Sarkodie-Mensah (2nd from left,) Chief of Staff, both at the Office of the Ga Mantse, and other members of the delegation and officials of Graphic
30.5k Shares

The Office of the Ga Mantse, King Nii Tackie Teiko Tsuru II, has called on the media not to allow controversies and litigation within the Ga State cloud their reportage, especially those of national and developmental interest.

The Head of Communication and Protocol at the Office of the Ga Mantse, Sylvester Parker-Allotey, intimated that those actions negatively affected the history, culture and progressiveness of the Ga State or Ga Dangme region.

“There are certain stories that are purely developmental; I don’t see any controversy about promoting a people, culture, history and development. So, we should not allow the litigation issues to cloud everything to the extent of jettisoning the history, culture and developmental issues of the Ga State or Ga Dangme region,” Mr Parker Allotey said.

He made the call when a team from the office paid a courtesy call on the Editor Graphic, Kobby Asmah, last Thursday.

Other members of the delegation were the Head of Media, Nii Lante Bruce, Jordan Dodoo, Lloyd Evans, the Chief of Staff, Justice Julia Naa-Yarley Sarkodie-Mensah.

Also present at the meeting were the Deputy Editor of the Daily Graphic, Theophilus Yartey, and the Foreign Editor, Mary Mensah.

Mr Allotey explained that his call followed the low media coverage of this year’s celebration of Homowo, a harvest festival celebrated by the Ga State .

“There have been some gaps and we want to build bridges and see the way forward so that everyone is happy.

“This year's Homowo, for instance, we had a lot of activities. Some were business focused, business is an important issue. We tried to see how best we can grow and attract foreign investors to our region.

“There are customs and traditions and then there is the office of the stool and the people of the region. Activities from these sections should be of interest.”

“There were beautiful activities and ceremonies; some we are trying to revive, but not much was read or seen in the media space.

“We need to work together, the media wants news and we want our news to be publicised,” he said.

Mr Parker-Allotey added that the king was trying to woo investors to aid in the realisation of making the Ga State a great one and having the media project what the state stood for would be an advantage.

“So far, we have Canada and are looking for more. However, we need each and every one on board to make such moves fruitful. We thought this aspect would have been promoted and covered but that was not the case,” he noted.

Responding to the concerns raised, Mr Asmah stressed that the Graphic Communications Group Limited as a business and its brands did not take their stakeholders for granted and would not deliberately sweep stories from the region under the carpet.

“The Homowo or any activity relating to the state or any other state is of importance to the Daily Graphic and knowing how critical stakeholders are to its growth, the newspaper will not thoughtfully take such a stance.”

“It is the hope of the GCGL to deepen its relationship with the Office of the Ga Mantse,” he stated.

Mr Asmah also pointed out that the controversies surrounding the Ga stool sometimes made it difficult for stories concerning the state to be covered or published.

“We have a lot of court threats and orders from people from the same state and sometimes when you weigh the options, sitting back and acting only when issues within the state have been resolved is the best option,” he explained.

Nonetheless, Mr Asmah added that the Daily Graphic is a professional media organisation whose aim is to be the voice of the people and contribute to the development of the nation.

“We report and stand for professionalism, truth and accuracy,” he stressed.