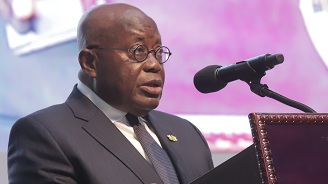 President Nana Addo Dankwa Akufo-Addo has challenged African nations and their financial institutions to come up with a new economic model that will serve the interest of their peoples and not profit advanced nations.

That, he explained, was necessary because “profits from our resources have benefited foreign creditors for far too long, while we suffer abusive borrowing cost on the international capital markets”.

The President added that there was no basis for African economies to be saddled with the so-called ‘African Risk Premium’, which translated into higher spreads for European and North American counterparts, particularly when African resources were the catalyst for the economic advancement of Western nations.

President Akufo-Addo, who is the African Union (AU) Champion for Gender and Financial Institutions, made the call when he opened the annual general meeting of the African Development Bank (AfDB) in Accra on Tuesday, May 24, 2022. 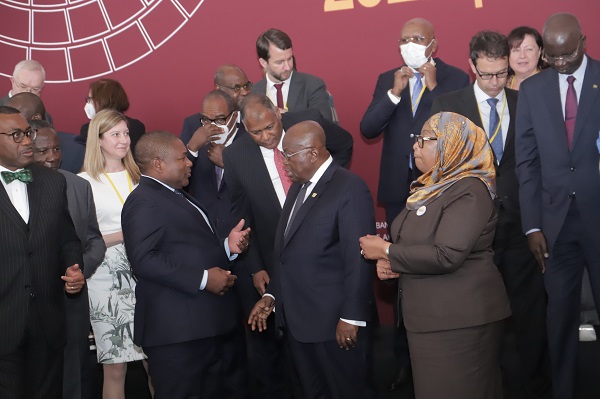 President Akufo-Addo interacting with President, Filipe Jacinto Nyusi (2nd from left) of Mozambique after the opening session. With them are Dr Akinwumi Adesina (left), the President of the AfDB, and President Samia Suluhu Hassan (right), of Tanzania. Picture: SAMUEL TEI ADANO

In attendance at the four-day meetings are the Presidents of Mozambique and Tanzania, Filipe Jacinto Nyusi and Samia Suluhu Hassan, respectively; the Vice-President of Cote d’Ivoire, as well as Finance ministers from Africa and other stakeholders from around the world.

President Akufo-Addo said it was high time Africa worked hard to address and remove the structural barriers to its development and also dealt with tax avoidance and illegitimate commercial transactions by multinationals.

He noted that those underhand dealings accounted for 60 per cent of the $88 billion which accounted for illicit financial outflows from the continent annually and other relationships that inhibited Africa’s development.

The President expressed grave concern over the increasing nature of the cost of climate change to Africa’s common humanity because Africa was bearing a disproportionate burden, although it had caused the least emissions of 3.8 per cent, with the Western nations being responsible for 76 per cent.

He said surprisingly, just a paltry $6 billion out of the worldwide total of $430 billion of Climate Adaptation Finance flowed to Africa, even though the United Nations Environment Programme had projected that between 75 million and 250 million Africans would be affected by climate-induced water stress.

He also spoke about the Conference of the Parties (COP 26) financing compliance, which could potentially strangulate Africa's natural resources, including natural gas, and asked rhetorically: “How do we develop under such unfair circumstances?”

He urged the AfDB to empower Africa to seek justice in the journey to clean energy in a manner that optimised the exploitation of its abundant natural resources.

The President said at the end of the meeting, Africa expected a framework that reconciled people and planet for peace because “we cannot fail the people and the planet; both must win. But for this to happen, Africa must win.”

President Akufo-Addo said debt challenges were compounding for Africa because in its pursuit of economic transformation, its debt profile had changed, and referred to the United Nations Economic Commission for Africa (UNECA) that indicated that the debt-to-Gross Domestic Product (GDP) ratio rose from 60 per cent to an estimated 70.1 per cent between 2019 and 2020, largely because of the COVID-19 pandemic.

“Eighteen African economies faced credit downgrades even when all economies were suffering from fallouts from the pandemic last year,” he noted.

He said in the midst of the challenges, African nations must be aware of their vulnerability to the monetary policy stance of the United States (US) Federal Reserve and the risk of so-called “taper-tantrums”, as investors might exit African markets, further exacerbating the increasing cost of borrowing.

He noted that in the trying times, the International Monetary Fund’s (IMF’s) $650 billion special drawing rights (SDRs), approved in August 2021, were meant to be of significant relief.

However, based on the allocation principles, African economies got just $33 billion, about five per cent, he lamented.

“Moreover, the promise to reallocate some $100 billion of the SDRs to our economies, which was agreed to at the Paris Summit in 2019, had yielded about $36 billion in pledges as of April 2022,” President Akufo-Addo indicated.

He, therefore, said the strategic decision to make the AfDB the delivery vehicle for the SDRs must be pursued and achieved, for the fact that leveraging the SDRs for four times as the AfDB did would significantly boost resources for Africa’s transformation.

The President of the AfDB, Dr Akinwumi A. Adesina, recounted that the Terminal Three of the Kotoka International Airport was financed by the AfDB, as well as the Pokuase Interchange, which he described as a masterpiece of architecture.

He said it was the first of its kind in West Africa and the second of such in the whole of Africa.