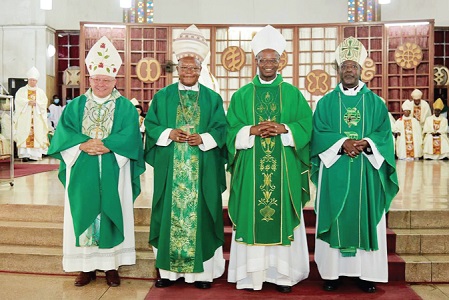 The Catholic Church has urged African leaders and other decision-makers to do their utmost best to fight insecurity on the continent.

In a message after the seven-day Symposium of Episcopal Conference of Africa and Madagascar (SECAM) in Accra, the church pointed out that many regions on the continent were experiencing severe insecurity due to socio-political instability, violence, economic poverty, weak health structures, insurgency, terrorism, exploitation of religion for political purposes and lack of respect for the environment and good governance.

“These situations are causes of anxiety for our people. This is why we are sending a message to all people of goodwill to help put an end to them,” it said.

The call by SECAM was contained in a five-page message it issued at the end of its 19th plenary assembly held in Accra from Monday, July 25 to yesterday [August 1, 2022].

The conference was organised on the theme: “Ownership of SECAM: Security and migration in Africa and the islands”.

More than 130 participants from Africa, with representatives from Europe and the Americas, took part in the symposium.
Cardinal Luis Antonio Tagle, Pro-Prefect of the Dicastery for Evangelisation, represented The Vatican.

Incidentally, the assembly was initially scheduled to take place in Burkina Faso, but due to the political instability in that country and the non-recognition of the military regime by both the African Union (AU) and ECOWAS, the Bishops of Africa found it inexpedient to hold their assembly in that country.

Instead, they decided to have it in Ghana, which also houses the head office of SECAM.
SECAM is the organ of pastoral solidarity for the Catholic Church in Africa and Madagascar.

The message said in finding a solution to the insecurity problem on the African continent, the church must play its prophetic role by firmly and clearly denouncing situations of insecurity and their causes.

“It must also continue to offer everyone reasons for hope and peace, in collaboration with organisations working for reconciliation, justice and peace,” it said.

Touching on the migration situation, it urged leaders and socio-political decision-makers to put in place the structures and conditions that discouraged irregular migration and encouraged good governance, employment opportunities, multifaceted security, political and social inclusion and the promotion of social justice.

It urged transit and host countries to respect the rights and human dignity of migrants.

“To all intending migrants, especially young people who seek to exercise their right to migrate, we urge them to do so in a manner that is administratively acceptable and with full knowledge of the challenges that await them.

“We encourage our youth not to lose hope and to hold on to God through a life of holiness,” it advised.

The message urged Christian communities to develop active pastoral care for migration, which could be broken down into four steps of action, namely: welcome, protect, promote and integrate.

“We wish to express our pain in seeing our youth leaving our countries, knowing that they are going to suffer and possibly lose their lives, and we lament our inability to stop them from leaving,” it said.

“We commit ourselves to take measures that will encourage their free choice and the ones that will involve them in the construction of their countries,” it added.

On the environment, the message called on all to listen to the cry of the poor and of the earth by caring for the environment, fighting against climate change and promoting social justice for the needy and the poor.

It expressed gratitude to the Catholic Church in Ghana and the people of Ghana for showing participants at the assembly great hospitality and also thanked President Nana Addo Dankwa Akufo-Addo for speaking at the opening ceremony of the assembly.

There are currently over 600 Catholic bishops in Africa, out of which 28 are Cardinals, among them two Ghanaians.

The Bishops of Africa have been speaking out and working against the growing imbalances between the North and the South of the world in terms of the distribution of resources.