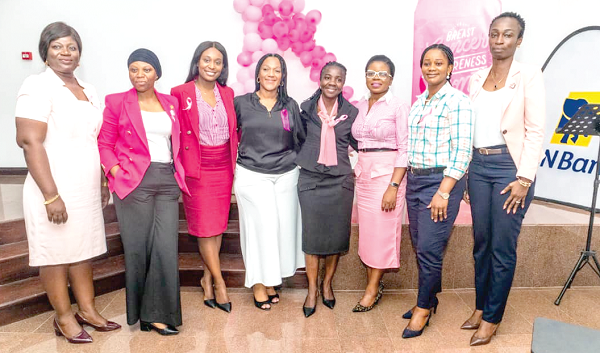 Some members of the FBNBank Womens Network
30.5k Shares

The FBN Bank has held a webinar to commemorate this year’s breast cancer awareness month which ended last Monday.

Held on the theme “Breast cancer, early detection”, the campaign was part of the company’s annual efforts to increase the understanding and education on breast cancer.

The session, which had both a virtual and on-site audience, was to show how important every woman’s life was and ensure that all women had access to education, screening, treatment and the support they needed to keep their breasts healthy and free from the cancer.

According to the International Agency for Research on Cancer (IARC), there were about 2.3 million new cases of breast cancer globally and about 685,000 deaths in the year 2020 alone.

The cancer has been known to be reduced by ensuring timely diagnosis, adequate treatment and patient management.


Delivering an address, the President of Pink of Africa, Juliette Mills-Lutterodt, who is also a breast cancer survivor, stated that “a lot of women lose their lives through this cancer.”

She recounted her experience of how her life came to a temporary halt after she was diagnosed with the cancer, and had to go under the knife to remove all the affected lymph nodes in her breast.

That, Mrs Mills-Lutterodt blamed on not paying enough attention to it in the early days of her life until it got out of hand as she advised women to take screening of their breasts serious to prevent or detect it early if any was growing.

“When cancer is diagnosed and treated early, a person has the chance not only to survive but to also thrive.

“I had to trust God to see me through and I survived. Doctors treat people but it is God who heals”, Mrs Mills-Lutterodt added.

The Chairperson of the FBNBank Women’s Network, Grace Isaac-Aryee, stated that she personally believed that it was important for women to focus on fighting the cancer rather than living with the fright that came with it.

“The fight against cancer and one’s ability to survive it does not depend on the individual alone but a strong support system which provides you with an opportunity to be with people who have a common purpose and are likely to understand one another”, she emphasised

In line with this, Mrs Isaac-Aryee who is also the Treasurer at FBNBank, made a cash donation of GH¢10,000 on behalf of the bank to Mrs Juliette Mills-Lutterodt in support of her awareness campaign on prevention and management of breast cancer.