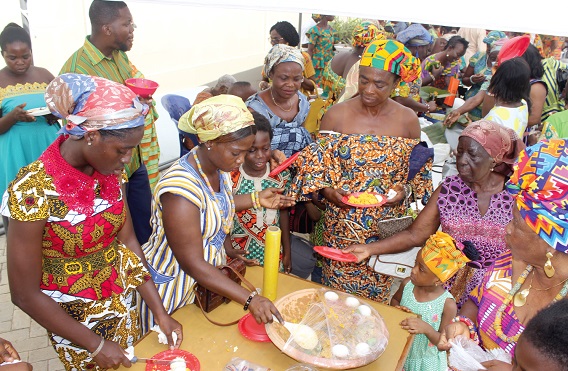 The Emmanuel Congregation of the Presbyterian Church of Ghana in Dansoman in Accra last Sunday held a colourful service to celebrate the Aged and Traditional Sunday.

Members of the congregation wore traditional outfits representing various tribes and cultures across the country for the occasion.

It was a blend of regular service protocols of worship, hymns and praises, along with traditional cultural tunes played with local instruments.

Local beverages such as sobolo and asaana were also on display.

The day is celebrated every second Sunday in December to appreciate the elderly of 70 years and above.

The service was on the theme: “Beloved, Your Promised Redeemer”.

The Associate Minister of the Emmanuel Congregation, Reverend Joseph K.L.M. Ansa, told the Daily Graphic that the day provided an opportunity to pray with the elderly and to be blessed by them.

He said the Traditional Day was also to strengthen the identity of each tribe and to appreciate their way of life.

“We want to appreciate our culture since it seems we are losing our cultural identity. Culture is a way of life, including our food, language, dressing, ceremonies and songs,” he said.

He said it was important to teach young people the various foods of various tribes in order that they appreciate the local traditional dishes.

“We are doing all these to recall some of the foods our fore fathers enjoyed which gave them strength; they ate such foods and the lived long,” he said.

A former Presbyter, Mrs Ellen Gyamerah Ako, in a sermon, thanked God for His protection from the beginning of the year up to December.

She said just as every tribe was identified by their culture, the Christian culture, however, was Jesus Christ and His word, and that it brought Christians together as one with the Holy Spirit.

She urged Christians to love one another as Christ loved man, so that they would be ready to meet Him.

Mrs Ako also encouraged Christians to have a personal relationship with Christ, adding that one’s contribution to the church, tithe and offering alone would not secure their place in Christ.

The Dansoman District Minister and the Minister in Charge of the church, Rev. Tetteh Suomi Akunor, reiterated the need for Christians to live as one people.

He said as the congregation remembered the birth of Jesus Christ during the Christmas period, they must live as one people with one Lord, one faith, and one baptism.

He called for the aged and the aging to be celebrated for their faith, sacrifices and perseverance towards the church.