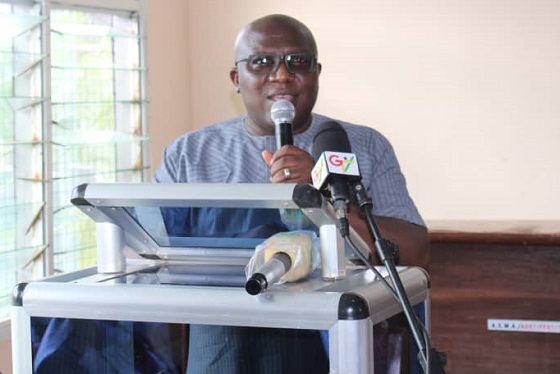 The Eastern Regional Minister, Mr Seth Kwame Acheampong has asked mining companies and individuals in the Eastern Region to be very considerate in their operations to prevent the destruction of the environment.

During a tour on Wednesday (August 11, 2021) of some mining towns and communities including Osino and Kyebi, in the Fanteakwa South and Abuakwa South respectively, where he met with companies and individuals in the extractive sector, he called on the sector workers to be responsible in their dealings and abide by the rules of engagement when they resume work on their concessions.

He said government will not tolerate any acts of indiscipline in the extractive sector, and would seriously deal with companies and individuals whose activities go contrary to laid down rules, as well as threatens the environment.

Advising the miners, he said they should properly read instructions on permits and licenses given them by both the Environmental Protection Agency (EPA) and the Minerals Commission, as the licenses are not sacrosanct and can be revoked.

He stressed that government's Operation Halt led by the Ghana Armed Forces has not stopped operation, and would therefore face squarely anyone illegally mining.

Reclamation
The Eastern Regional Director of EPA, Mr Addo Okyireh in his encounter with the miners asked them to pay attention to the health of the environment and design appropriate reclamation plans before commencing any extraction.

He urged the miners especially the small scale miners and community miners to subscribe to the land reclamation bond to give government the needed resources to reclaim lands after mining.

He again appealed to the miners to observe the distance rules from vital social amenities including roads, pylons, buildings as well as rivers, streams and other water bodies in order to avoid any destruction of such places.

Licensing; investment
The Eastern Regional Director of Minerals Commission, Mr Joshua Quaye-Sowah in his address urged persons in the extractive industry to consult experts who would explain variations in the various licenses before they begin any mining activity.

He said some persons and companies were fond of using prospecting licenses to commence proper mining, which according to him constituted illegal mining.

He appealed to the sector workers to invest in the identification of exact ore deposits and mine accordingly to help curb the destruction of other portions of concessions unnecessarily.