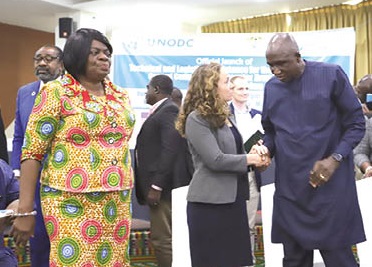 Ambrose Dery (right), Minister for the Interior, in an interaction with Chris Carlisle (2nd from left), Director, International Narcotics and Law Enforcement Affairs, Embassy of the US in Ghana, after the launch. With them is Adelaide Anno-Kumi (left), Chief Director, Ministry of the Interior. Picture: EDNA SALVO-KOTEY
30.5k Shares

The Minister of the Interior, Ambrose Dery, has said illicit drug trafficking and related organised crimes could threaten the stability, security and sovereignty of many states.

He said those activities had been recognised as international criminal practices which enabled transnational criminal organisations to infiltrate, pollute and corrupt the social, political and economic structures of states.

The minister was speaking at the launch of a project to build and strengthen the capacity of law enforcement officers to deal with issues of illicit drug trafficking and related organised crimes in Accra yesterday.

Among the objectives of the technical and logistical assistance project of the Narcotics Control Commission (NACOC) is to counter drug trafficking and organised crime and also create a digital library for NACOC’s Enhanced Intelligence and Documentation Unit.

It will also improve the knowledge and skills of officers, while encouraging organisational culture that respects human rights and the rule if law.

A concept for a sustainable drug forensic laboratory will also be developed to facilitate coordination, information sharing and a culture of partnership between NACOC and the Ghana Police Service.

The two-and-half-year project is being spearheaded by the UN Office on Drugs and Crime (UNODC) and funded by the US Bureau of International Narcotics and Law Enforcement (US/INL).

Mr Dery said the successful implementation of the project would position NACOC to efficiently execute its mandate of ensuring that the country was not used as a transit point.

“This assistance will also help protect our communities and our youth from engaging in illicit drug use,” he added.

The acting Director-General of NACOC, Kenneth Adu-Amanfoh, said Ghana’s strategic coastal location, which is along well-established trade routes, coupled with the large population of unemployed youth, enabled organised criminal groups to traffic a variety of illicit products, including drugs, which were regarded as major security concerns for the country.

“While Ghana is well-known for cannabis cultivation, it has recently emerged as a trans-shipment point for European-bound cocaine produced from coca plants found almost exclusively in northern and western South America.

“And as an institution, we take this seriously, for which we have deployed all available resources and formed partnerships to gradually reduce the treats,” he said.

The Director-General of the Police CID, COP Ken Yeboah, said the complex nature of organised crime by a network of criminals called for collaboration among the relevant security agencies.

The UNODC Regional Director for West and Central Africa, Dr Amado Philip de Andres, said the project aimed to enhance the capacity of NACOC and strengthen the operational collaboration between the Police Drug Law Enforcement Unit and other stakeholders.

The UNODC Country Director, Bernard Asamoah, said the project would strengthen the relationship among the CID and NACOC and other related agencies.

The Head of the UN Resident Coordinator’s Office, John Keating, said the UN in Ghana was fully committed to supporting the country’s national development priorities to attain the UN Sustainable Development Goals, including SDG 16.

The Director of the International Narcotics and Law Enforcement Affairs of the US Embassy in Accra, Chris Carlisle, said to deal with drug trafficking, there was the need for the various stakeholders to work more effectively and efficiently.