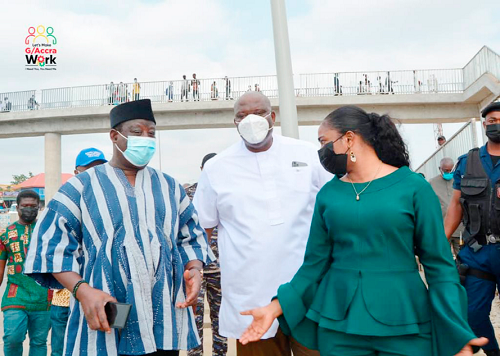 The Minister of Roads and Highways, Mr Kwesi Amoako Atta, has warned the public not to turn areas around the new Pokuase Interchange into illegal transport terminals or trading centres in order not to undo the essence of the facility.

He noted that such activities could end up generating filth, congestion, choked drains and vehicular and human traffic around the area, thus, creating a lot of inconvenience and nuisance for pedestrians.

“Your business is very important to the country’s socio-economic development, so we are not here to stop you. However, we can’t allow you to put the lives of the citizens at risk. We constructed the walkway for pedestrians and not for trade purposes, so whoever decides to play recalcitrant will not be spared,” the minister stressed.

Mr Amoako Atta said this when he toured the facility last Wednesday with the Greater Accra Regional Minister, Mr Henry Quartey, to access the situation in the area.

It followed reports that aspects of the interchange had been taken over by traders, with some parts turned into a mini bus station by commercial vehicle drivers.

There was, perhaps, just a hint of the chaotic scene of the illegal bus station or the trading centre that the newly inaugurated interchange had come to be identified with, with the growing pile of plastics around the area appearing to bear testimony to the robust commercial activity within the vicinity, while a few commercial vehicle drivers jostled for passengers at the bus stops along the interchange.

The minister stressed that the government would not tolerate any indiscipline which could put the lives of people at risk, noting that such activities could cause pedestrian accidents.

“This phenomenon has become common on almost every principal street and ends up degrading the beauty of the city, but we are not going to allow it to happen here,” Mr Amoako Atta stressed.

He said the ministry, along with the Greater Accra Regional Coordinating Council (GARCC), would provide the traders an alternative trading area, and tasked the Ga West Municipal Assembly (GWMA) to provide a suitable area for the proposed market facility.

The Regional Minister also tasked the assembly to ensure the deployment of a security task force to the facility to ensure sanity in the area.

“This cannot continue, else it beats the purpose for which this interchange was constructed. We need to end it now before it gets out of hand,” Mr Quartey said.

The Municipal Coordinating Director (MCD) of the Ga North Municipal Assembly, Dr Hamed Rufai Ibrahim, said land had already been acquired for the purpose of relocating the commercial vehicles.

He said the assembly was now looking for ways to develop the place to make it more suitable for commercial activities.