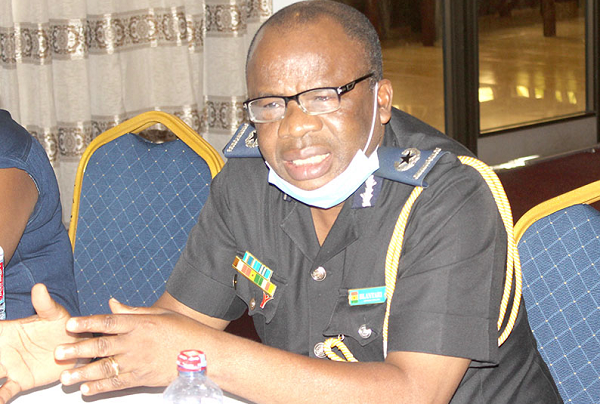 ACP Jones Blantari, Board Chairman of Inerela +, explaining a point at the seminar
30.5k Shares

The decision by some religious leaders not to conduct marriages for would-be couples who test positive for HIV/AIDS during counselling has been linked to the promotion of stigmatisation and discrimination against people living with the disease.

The Board Chairman of Inerela + Ghana, Assistant Commissioner of Police (ACP) Jones Blantari, who said this, stated that the decision of whether to go ahead with a marriage to a partner who had tested positive for HIV/AIDS or not, should be the sole prerogative of the would-be couple and not the religious leaders.

ACP Blantari said this at a capacity building workshop for media personnel on the law and media reportage organized by Inerela + Ghana, an international network of religious leaders living with or personally affected by HIV/AIDS.

“Asking would-be-couples to go and do HIV test during counselling should not be a must. Counselling is for people to make informed choices. Both parties, that is the would-be couple can agree to go and do some test to see what is wrong with them and based on the results, they can agree to go ahead with the marriage or not. But you a pastor or Imam should not say because of this I am stopping the marriage. No!” ACP Blantari stressed.

He explained that HIV/AIDS test results were not supposed to be disclosed to anybody including a pastor or imam, adding that it should be the couple’s decision to disclose the results of the test to the pastor or imam voluntarily but not an issue of compulsion.

ACP Blantari said what some of those religious leaders were currently doing was that, even before would-be couples were asked to start counselling during which period they would be asked to go for HIV/AIDS test, they had already been introduced to the congregation.

For this reason, when any of them tests positive for the disease, on which grounds does the religious leader announce the cancellation of the marriage?

He stated that what most of those religious leaders failed to recognise was that, if somebody had tested positive for HIV/AIDS, and was taking the drugs religiously, that person could go into the state that the virus was undetectable, and could not transfer the virus to a partner who was negative.

However, he said, most of the religious leaders did not know about that and so went ahead to refuse to allow would-be couples to go ahead with their marriages the moment one of them tested positive.

In her submission, Mercy Acquah-Hayford of Inerela+Ghana said people had to move away from religion a bit with regard to counselling because if they did not, people would continue to be deceived by some of those religious leaders, especially those in the Christian faith.

“Let’s put an end to stigmatisation because it is not a good thing. When you stigmatise people, they cannot work and they can become bankrupt. Stigmatisation kills, let’s stop it,” she charged.

A Licenced Councillor at the Commission on Human Rights and Administrative Justice (CHRAJ), Paulina Louisa Essel, who spoke on gender-based violence called on journalists to use the pen to save lives.