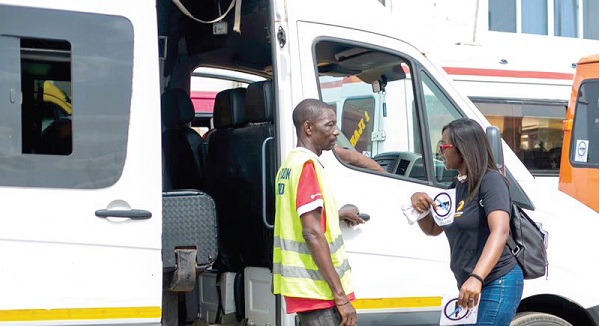 Eunice Osei-Tutu (right), Sustainability Responsibility Manager of Pernod Ricard, educating one of the drivers at the Obra Spot near Circle Follow @Graphicgh

She said alcohol intake and substance abuse impaired the vision of drivers and could result in road crashes, leading to death and injury.

Consequently, she advised them to avoid indulging in such acts to prevent road accidents.

Ms Osei-Tutu gave the advice during a sensitisation programme dubbed ‘Metwi a Mentwa,’ to wit, (If I drive I won’t drink) in Accra.

The campaign, aimed at reducing the high incidence of drinking, was organised by the Pernod Ricard Ghana in collaboration with the Street Sense Organisation who are into road safety advocacy and campaign.

She said the transport sector was crucial to the economy, stressing the need to reduce the menace of road crashes to protect the country’s human resource and the economy.

“We are optimistic that creating awareness among commercial drivers will limit the dangers of drink-driving as it is one of the ways to help reduce deaths and injuries from road traffic accidents,” she stated.

She said ‘Metwi a Mentwa’ was one of the programmes under the responsibility hosting pillar of the Sustainable Development Goal 3 that emphasised healthy life and promoting the wellbeing of all ages.

Ms Osei-Tutu said the company would visit 10 transport stations, including the Neoplan Station, Tema, Tudu, Ashaiman, Amasaman in the Greater Accra Region, Nsawam in the Eastern Region as well as Kasoa in the Central Regional, to educate the drivers on the need to ensure safety on the roads.

The Director of Operations, Monitoring and Evaluation of Street Sense, Gabriel Dake, underscored the need to collaborate with Pernod Ricard Ghana to promote road safety on the roads during and after the Easter celebration.

He urged drivers to adhere strictly to the road safety regulations by avoiding substance abuse and use when driving, the use of mobile phones, wrongful overtaking and speeding.

The Vice Chairman of the Obra Spot GPRTU, Ebenezer Arhin, commended the organisers of the programme for the initiative, saying it would go a long way to ensure safety on the roads.

He called for more of such collaboration to ensure that lives and properties were saved.

As part of the occasion, fliers labelled ‘‘Don’t drink and drive’’ were distributed to drivers.