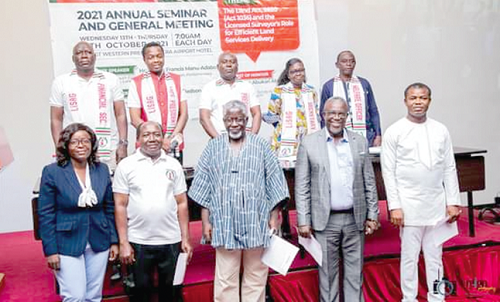 The Licensed Surveyors Association of Ghana (LiSAG) has elected new executives to lead the association for the next two years.

The new executive is led by Mr Samuel Larbi Darko, an engineer and surveyor who was elected as the president at the Annual Seminar and General Meeting of the LiSAG in Accra.

Mr Darko is the Chief Executive Officer (CEO) of the Losamills Consult Ltd.

He takes over from Mr Kwame Tenadu Sr.

He holds a BSc in Geodetic Engineering from the Kwame Nkrumah University of Science and Technology (KNUST) and a Postgraduate Diploma and MSc in Integrated Map and Geoinformation Production from the International Institute for Aerospace Survey and Earth Sciences of the University of Twente in the Netherlands.

Mr Larbi served three consecutive terms as the Honorary Treasurer of the Ghana Institution of Surveyors.

He was a Commission Chair of the International Federation of Surveyors (FIG) and a founder member of LISAG.

He worked at the Survey Department headquarters from 1987 to 1995.

Mr Gustav Asamoah will serve as Executive Secretary of the association, with the immediate past President, Mr Tenadu Sr, leading the Council of Elders.
Professor Edward Osei, Peter Opoku, as well as Ms Benedicta Borkey Reinarh, who represents the young surveyors, are the other members of the council.

In his acceptance speech, Mr Darko said his priority would be to lead the association to weed out quack practitioners and to ensure that all licensed surveyors in the country were abreast of the Land Act, 2020 (Act 1036).

He said because many people did not understand the work of the surveyor, there was confusion as to who truly qualified to be in that professional space.

He explained further that the licensing of surveyors dated back to the colonial period and that its existence was enshrined in the various legislations promulgated from pre-colonial times till date in the form of the survey ordinances and currently the Survey Act 1962, (Act 127).

Mr Darko explained that the Land Act, 2020 (Act 1036) required that all families, clans, stools and land-owning groups must have their lands surveyed before they could register them, and encouraged them to always employ the services of licensed surveyors to undertake such tasks.