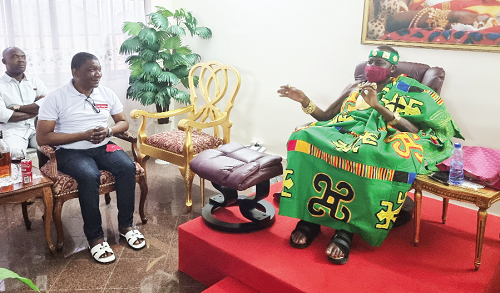 The Editor of the Daily Graphic, Mr Kobby Asmah, recently had an exclusive interview with the late former government and global Statistician, academic and the Omanhene (paramount chief) of the New Juaben Traditional Area in the Eastern Region, Daasebre Prof. Oti Boateng, at his palace, on his roots-based model of development for the country and Africa as a whole.

The model places a lot of premium on inclusivity rather than exclusivity. Prof Oti Boateng sadly passed away on August 9, last month after 29 years as Omanhene of the New Juaben Traditional Area.

Below are excerpts of the interview.

Kobby Asmah: You have spoken a lot about how Ghana and by extension Africa can quicken its pace of development. One key panacea you have not shied away from and consistently endorsed is the roots-based development plan you have developed for Ghana and indeed for the entire African continent. All along, Ghana and Africa have largely been following the Western model of development.

Why the root based model? Can you please expatiate a bit on this development model that you always espouse?

Daasebre Oti Boateng: The roots-based model has been developed because the Western model has not worked for Africa. It is alien for Africa because it is winner takes all and again it is each man for himself and God for us all. So, I have developed this roots-based model, which includes all the citizens. It is all about inclusivity rather than exclusivity.

Kobby Asmah: What are the fundamental underpinnings of this model?

Kobby Asmah: Now, in terms of the three pillars, have the communities shown their preparedness for that kind of task?

Daasebre Oti Boateng: Of course, the roots-based development infrastructure, which is the bottom-up development architecture, strongly has the community involvement.

The model, has in every community, what we call the Community Development Council (CDC). So, it is from the community itself tailor measured development programmes emanate and it is the, same communitys that own the development process.
So, the idea of them rejecting the process does not even arise at all, but we have never heard of this before from the government or the private sector. They decide something from the top, come to the community level, and they say you do this, you do that from afar. This does not work anywhere and doesn’t work at all!
What really works is for the community themselves to have and own their own community development governance and to decide for themselves what is good for them.

Daasebre Oti Boateng: This is what we are doing in New Juaben and it is working and everybody is happy.

Kobby Asmah: Daasebre, the truth of the matter is that as you are rightly espousing the need for the involvement of the community in the development process, it is equally so depressing that as you walk and drive around, you see individualistic tendencies — each for himself, God for us all attitudes. Why do you think are we where we are?

Daasebre Oti Boateng: This is so because of the colonial heritage of exclusive development, but we are changing it and must change it. Rome was not built in a day. If you read the book on the root based development model, you will find they are implementing roots-based development.
It will tell you that development is not reckoned in weeks or years, but it is reckoned in decades.
So, Rome wasn’t built in a day. Don’t deceive yourself that from tomorrow everything will change. You need to change the perceptions of people. That is why I have written the book. We will drive education into the populace to change their mindset so that what they are doing, they will be conscious of it. Gradually, systematically we shall get there. Where there is a will there is a way.

Kobby Asmah: Ghana is over 60 years and we are still struggling to meet the basic needs of the citizenry including potable water, food, shelter and even access to toilet facilities,

Daasebre Oti Boateng: We are where we are because in 1957 nobody dreamt of the roots-based model. It is now that through constant feedback interaction, through my own experiential knowledge, from inside and from without, I have been able to come up with a model.
We’ve got to work with the model and now I have come out with a solid model that has received a worldwide award — it is a global model and we are doing it and we are zooming in at a time. So, if we didn’t see the light in 1957, now I, Oti Boateng have developed the light.

Kobby Asmah: Why must we think that this model will work?

Daasebre Oti Boateng: It has taken a lot of logic, a lot of gusto, a lot of impetus, a lot of fillips to reach where I am and it is by commitment and it is already working..

It will work because it is solidly engraved in all the communities. It is owned by all the citizens of the country as compared to the “winner takes all” – 149.9 per cent of the populace are excluded in governance. That is not good, but here all the communities – every community has got its own community development plan.

They own it, it belongs to them so they will not part it away. If you are in a family, are you going to throw the family away? You are part and parcel of the development process, so the idea of it not working does not even arise.

Kobby Asmah: What is driving you in this enterprise?

Daasebre Oti Boateng: If you read chapter three of the book on implementing the roots-based model, the whole chapter is called the genesis of the whole roots-based model. That genesis will tell you that it is the Yiadom Hwedie family structure that brings the impetus in me.
Really, it is Nana Adakwa Yiadom who actually killed Ntim Gyakari when he was demanding a whole lot of things including gold filled in his brass pan. The brass pan is in there.

We went to the Feyiase War, we spearheaded the Ashanti War against Denkyira and we won in 1701. It is all in there. That has ingrained in me the boldness, the gusto, the impetus to really move and then get something done.

So, it is the Yiadom Hwedie spirit which is driving me. And then there is also the Chilean earthquake of February 2010. I was in Santiago where I experienced this Chile earthquake and I nearly died.

From there it inculcated in me the need to develop a disaster reduction philosophy. So, I developed a theory for disaster risk reduction. In August 2010 I went to Cambridge, delivered a paper and it got approbation from all scholars of the world.
I developed this further into the roots-based model so it is a longish period. Rome was not built in a day so it took me 10 years to reach where I am.

Kobby Asmah: Daasebre, amazing story, but I want to find out from you. What has been the fault lines providing the very basics of everything for the people?

Daasebre Oti Boateng: I wrote a paper on population census — the need to use data. The need to do scientific studies to know where the fault lines are in order to know where to fix it, because if you don’t know where the fault lines are, how are you going to fix them?
We also have to have a maintenance culture. If you fix a road, it is necessary but not sufficient. You have not finished; you have got to develop a maintenance culture to maintain that road at periodic intervals.
So, we’ve got to inculcate this idea into us. It is not a joke. It is education. Systematic education. Don’t worry why we are where we are but the important thing is that from now, we are going to change it.
The status quo antics should cease. We’ve got to develop a new model, that’s all.

Kobby Asmah: Thank you so much for this insight that you have shared with us but going forward and just concluding, what would you say Ghana must do going forward?

Daasebre Oti Boateng: You see the roots-based model book has all the ingredients. The change of attitude, the community development governance, how to love your neighbour, how to include every citizen in the development structure.
It doesn’t take a general election then you are excluded or you are included. That one will be out. You are always part of the development process. Inclusivity in development. With this we shall go forward.

Kobby Asmah: So, in 2024, as we embark on another major national elections, what advice will you give to Ghanaians?

Daasebre Oti Boateng: It is yet too early to give the 2024 advice, since it is a stochastic process and several things are going to come into the equation. But we are monitoring; let us wait and see. Once it approaches, we shall give appropriate advice.