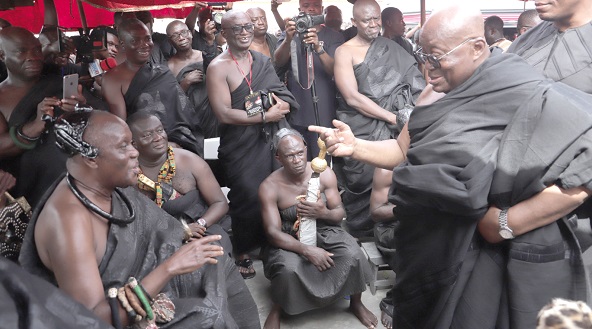 The remains of the Omanhene of the New Juaben Traditional Area, Daasebre Professor Emeritus Oti Boateng, and the Queenmother, Nana Yaa Daani II, were laid to rest in the wee hours of today.

Their bodies had been lying in state at the Yiadom-Hwedie Palace in Koforidua for mourners to pay their last respects amid the display of the Oyoko tradition of the Asante people, characterised by drumming and dancing, singing of dirges and firing of muskets.

Yesterday, an interdenominational burial service was held for the two traditional leaders.

Last Saturday, President Nana Addo Dankwa Akufo-Addo led a large government delegation to pay their last respects to the Omanhene and the Queenmother.

Some of the personalities in the delegation were the Vice-President, Dr Mahamudu Bawumia, and the Chief of Staff, Akosua Frema Osei-Opare.

Former President John Agyekum Kufuor, a former Chief of Staff, Julius Debrah, who represented former President John Dramani Mahama, Regional Ministers, Members of Parliament (MPs), members of the diplomatic corps, former ministers of state, former and present members of the Council of State, some municipal and district chief executives (MDCEs) and heads of the security services were also in attendance.

The political parties particularly the ruling New Patriotic Party (NPP) and the National Democratic Congress (NDC) were not left out as some of their constituency, regional and national executive also filed past the bodies. 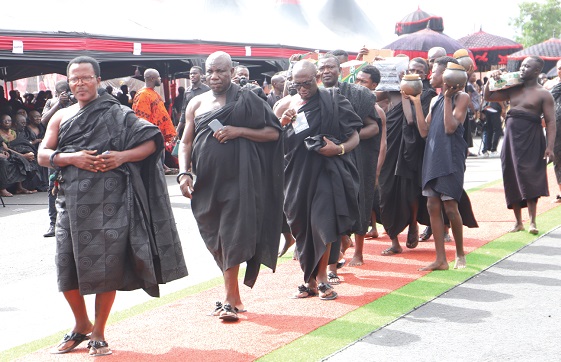 Traditional rulers such as the Paramount Chief of Techiman Traditional Area, Oseadeeyo Akumfi Ameyaw, and the Aburihene, who is also the Adontenhene of Akuapem, Otoobuor Gyan Kwasi, also gave a royal touch to their departed colleagues by wearing the Kuntunkuni (deep black cloth).

Also present at the event were chiefs and queenmothers from New Juaben in the Eastern Region, and Juaben in the Ashanti Region, led by the Juabenhemaa, Nana Akosua Akyamaa III.

The Yiadom-Hwedie Palace and its surroundings were awash with black and red signifying how the death of the two leading traditional rulers had plunged New Juaben into a state of sorrow.

In line with time-tested Asante tradition and culture, all those who filed past the remains were dressed in black. 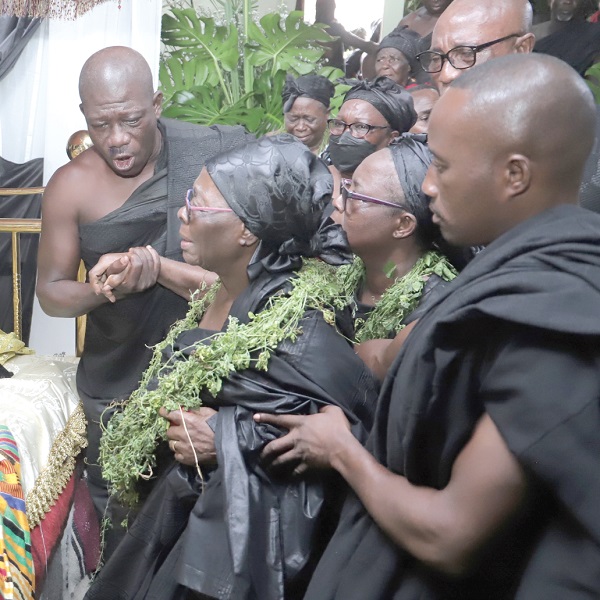 The Juabenhene, Nana Otuo Siriboe II, who is the younger brother of Daasebre Oti Boateng, sat in state with the Bekwaihene, Nana Osei Kwadwo II.

Nana Siriboe, who is also the Chairman of the Council of State, is the chief mourner.

Some of the dignitaries who spoke to the Daily Graphic eulogised the two traditional rulers for serving their people diligently.

The Eastern Regional Minister, Seth Kwame Acheampong, described the late Omanhene as a person who at all times fostered development and lived in peace and in unity with his people.

Mr Acheampong said the passing of the two traditional leaders must awaken the people and encourage them to come together to build the traditional area.

He said it was only unity, peace and stability, and the preservation of the Asante traditions that would make the traditional area great.

The Municipal Chief Executive (MCE) for New Juaben South, Isaac Appaw-Gyasi, said he saw the two leaders as true patriots who wanted the best for their traditional area and the country.

He also described them as great leaders who committed themselves to the cause of development of the traditional area.