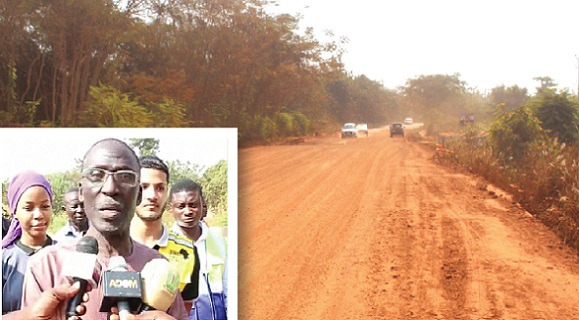 For commuters and drivers who use the Kotokrom-Chiraa stretch of the deplorable Sunyani-Techiman highway, their greatest nightmare is how to drive past a small farming community, Kobedi.

The Kobedi portion became a notorious area because of a very deep pothole that cut across the road due to years of neglect.

The situation resulted in accidents and frequent breakdown of trucks, particularly those carrying goods from the Bono Region to the Bono East Region and beyond.

But now, this has become a thing of the past because the Chief Executive Officer of PMC Construction Limited, Alhaji Abdallah Ahmed-Abdallah, has levelled up the area from his own resources to ensure the free flow of traffic and safety of motorists.

"I can't wait for the road to be awarded on contract before something is done to save lives," he told the Daily Graphic.

He said the cost of the rehabilitation of the stretch was his Christmas gift to people in both the Bono and Bono East regions.

On site are also mouldings and trips of chippings and sand to be used by the contractor to construct a culvert to avert the creation of such deep potholes in future.

"As a seasoned contractor, it is my social responsibility to use part of my income for such philanthropic ventures, since the government alone cannot solve problems in the road sector," Alhaji Abdallah stated.

According to drivers plying the road, in a single day, they could count more than six vehicles, particularly long trucks, involved in accidents on the stretch due to the poor nature of the road.

Speaking to newsmen when the Bono Regional Minister, Ms Justina Owusu-Banahene, visited the site, Alhaji Ahmed-Abdallah said he was rehabilitating that portion of the road to support the government's efforts to improve the poor nature of the road and reduce frequent accidents in the area.

He explained that he was also touched by the frustration of commuters and the appeal by the Bono regional minister to finance the rehabilitation of the road to bring relief to road users.

She explained that the contractor on the Kotokrom-Chiraa road had abandoned the project for reasons she did not know, adding that she was in talks with the contractor to bring him back to site.

Ms Owusu-Banahene thanked Alhaji Ahmed-Abdallah for volunteering to reshape the dangerous portion of the road to avoid accidents and facilitate movement on the road.

“This shows his patriotism, spirit of volunteerism and love for the region," she said.