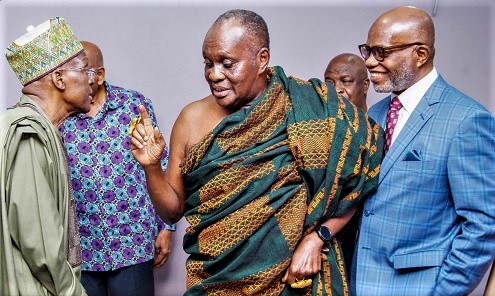 While promising the Speaker its support, the Council of State also asked Mr Bagbin to bring his experience as a former Member of Parliament (MP) to bear on the work of the Legislature.

The Chairman of the Council of State, Nana Otuo Siriboe II, gave the assurance when he led some members of the council to meet with the Speaker at Parliament House Tuesday.

The meeting was the final engagement with the leadership of Parliament and the Speaker to ensure that the House worked together for the common good of the nation and Ghanaians as a whole, devoid of the tension, acrimony and confrontations that had characterised deliberations of the Eighth Parliament.

The meeting deliberated on matters of national importance and the need for the three arms of Parliament, consisting of the Majority, the Minority and the Speaker, to work together in harmony to deliver national goals and consolidate the democratic culture and values of the country.

As was the case with previous meetings between the council and the majority and the minority, the meeting with the Speaker was held behind closed doors.

Before the closed-door meeting, the media were allowed to cover the opening remarks by the parties.
Nana Siriboe II, who is also the Paramount Chief of the Juaben Traditional Area in the Ashanti Region, expressed grave concern over recent happenings in Parliament.

He expressed the hope that the engagement with the leadership of the House would help reduce the tension that had characterised deliberations in the House and bring about what Ghanaians wanted to see and learn from their MPs for the good of the nation.

"If we, as the Eighth Council of State, do not move with the support we pledge and sits down for things to get out of hand, we will equally be accused of not doing our work as expected of us by the good people of Ghana," he stressed.

Nana Siriboe said there had been institutional, egoistic and procedural issues, among others, and even fisticuffs, sometimes, a niche not to be desired, and there was, therefore, the need for the council to move in.

"As our elders say, it is bent but not broken, and so it can be mended, and to be able to mend it effectively, you need to start from the right place," he noted.

The Chairman of the Council of State expressed satisfaction with the engagement so far with both the Majority and the Minority caucuses, which he described as “open and frank, rewarding and extremely refreshing.”

He re-emphasised the fact that Parliament stood as a tripod of legs, the Majority, the Minority and the Speakership, and for Parliament to be strong, all the arms should be coordinated in such a way that there was harmony among the legs and arms.

He indicated that God knew why Mr Bagbin was elected at this point in time as the Speaker for a hung Parliament in which both sides of the House are of the same number and, therefore, needed someone with the worth of experience to manage and steer the affairs of Parliament in harmony and fairness.

While expressing gratitude for the meeting, Mr Bagbin stated that Parliament had been the bastion of Ghana's democracy and, therefore, there was the need for it to be strengthened to play its role effectively as the representation of the people.

He pledged his commitment to remain impartial, fair and firm in applying the rules of the House anytime he presided over meetings.

Mr Bagbin said he did not expect both sides of the House to be happy with his decisions, but he would always ensure that the national interest and that of Ghanaians was paramount among all others.

According to him, because of the hung nature of the Eighth Parliament, there was no absolute Majority and Minority, saying all must understand and work with it.