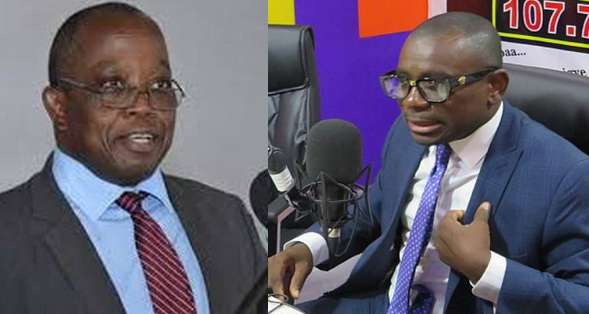 The Auditor-General, Mr Daniel Yaw Domelevo, has told a Deputy Minister of Agriculture, Mr Kennedy Osei Nyarko to address his (Nyarko’s) concerns of an audit report on some scholarship beneficiaries to the Ghana Education Trust Fund (GETFUND) and not him, the Auditor-General.

Lawyers for Mr Nyarko wrote a letter on Tuesday (February 25, 2020) to the Auditor-General giving him a 24-hour ultimatum to expunge the name of the Deputy Minister from a list of certain individuals who were allegedly awarded scholarships by the GETFUND.

According to the letter, Mr Nyarko, who is also the Member of Parliament (MP) for Akim Swedru in the Eastern Region, had never “received any money from GETFUND nor benefitted from any scholarship to pursue further studies” in a university outside the country as indicated by the A-G in his findings.

Go to GETFUND
However, in his response dated Wednesday (February 26, 2020), Mr. Domelevo said the information contained in the audit report was provided by the GETFUND, so any concerns should be forwarded to the GETFUND for redress.

“Certainly, my office has no malice or bias towards any individual named as beneficiary from GETFUND in our audit report. Your grievance, therefore, is best addressed by GETFUND which provided the audit team with the necessary information and names of beneficiaries during the audit”, the letter signed by Mr Domelevo and addressed to lawyers for the Deputy Minister stated.

Lawful publication
The Auditor-General also refuted claims that his outfit published a “supposed list of top political figures”, adding that any publication by the Audit Service was in conformity with the law.

“My office in consonant with Article 187 (2) of the 1992 Constitution and Sections 13(e) and 16 of the Audit Service Act, 2000 (Act 584) undertook a special audit at the GETFUND office spanning the period 2012 to 2018 and submitted a copy of the report to Parliament as mandated by law. In pursuant to Section 23 of Act 584, a copy of the said report is published on our website”, the letter added.

List of beneficiaries
The Auditor-General’s findings between 2012 and 2016 have come up with a list of 88 scholarship beneficiaries, including Dr Mathew Opoku Prempeh, Education Minister and Ms Adwoa Safo, MP for Dome-Kwabenya, both Members of Parliament at the time they benefitted and currently prominent members of the government.

Also named on the list is Dr Prince Hamid Armah, currently the Executive Secretary of the National Council for Curriculum and Assessment (NaCCA).

However, Dr Opoku Prempeh, has described the findings as “a story, borne out of mischief and lies, intended to cause disaffection”.

Dr Armah, also in a reaction, said the report was a “palpably false story that is driven purely by the worst political instincts”.