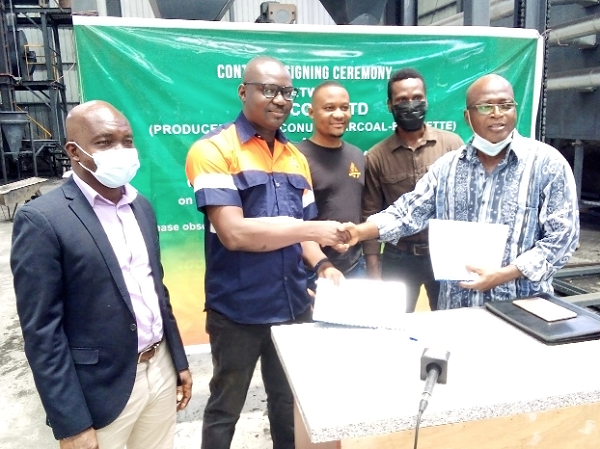 A Local producer of charcoal briskets from coconut husks has received the greenlight to export part of its produce to Canada, Mexico and the United States of America (USA).

The offer will enable Zaacoal Company Limited, the local producer of the clean energy fuel, to expand its production, contribute to saving the environment, and employ more people, especially the youth.

The greenlight follows the signing of a memorandum of understanding between Zaacoal and a Canadian company, QE 24 Group, for the distribution of the coconut husk charcoal on the international market, starting from the three countries.

The agreement will also support Zaacoal Company Limited to scale up the processing of coconut waste into charcoal for both domestic and industrial use.

Staff of the two companies witnessed the signing ceremony which took place at Pese, near Dodowa, in the Shai-Osudoku District in the Greater Accra Region.

At the ceremony, Mr Sulley said coconut waste initially had no use but upon research trials by his outfit, it was found out that the waste could be processed into charcoal.

He said the company had since started processing coconut waste, and currently produced about three tonnes of the new commodity per hour.

"Processing of the coconut waste is environmentally friendly because no tree is cut, and moreover there is no pollution that is harmful to the lives of people.

"Using the charcoal from the coconut waste either for domestic or industrial purposes does not also produce ash, making it the best of all kinds of charcoal," the founder and CEO stated.

Mr Hackman expressed satisfaction that his company would now be marketing the commodity on the international market.

Mr Hackman stated that the price of their produce on the Ghanaian market would be cheaper and affordable to all, adding that it was one of their main reasons for going into the production of the commodity.

The Director in-charge of Sales and Marketing of Zaacoal Company Limited, Mr Mawuli Gbedawu, said the Ghanaian public was initially not too receptive to the charcoal produced from coconut waste but added that now they had fully embraced it.