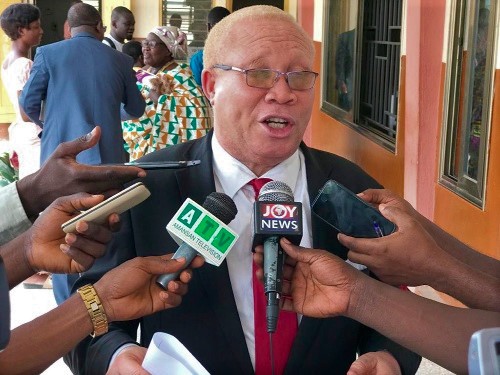 Mr Moses Foh-Amoaning answering questions from the media after the event
30.5k Shares

The National Coalition for Proper Human Sexual Rights and Family Values has passed a resolution to compel the Ministry of Foreign Affairs to stop issuing visas to members of the International Lesbian, Gay, Bisexual, Transgender and Intersexual Association (ILGA) who have planned to organise a conference in Ghana.

The coalition has also appealed to the government to come out with a comprehensive policy backed by an Act of Parliament to discourage the association from operating in Ghana.

According to the coalition, the South African-registered group Pan Africa ILGA, had a number of activities lined up for its fifth regional conference slated for Accra from July 27 to 31, this year.

The proposed international conference is on the theme: “Sankofa: Looking back to our roots - Reclaiming our right”, which is contained in the group’s website.

The resolution, which has been assented to by traditional authorities, religious bodies, including Christians and Muslims, the media, civil and public servants among other stakeholders, elicits a comprehensive national and Pan-Africanist response against the LGBTQI phenomenon.

Mr Foh-Amoaning, who read the resolution which was passed at a national dialogue in Koforidua in the Eastern Region, told journalists that the coalition would do everything possible to resist the scheduled five-day event.

“Homosexuality and lesbianism are illegal in Ghana and, therefore, the association will not tolerate any such conference in Ghana, trust me it will not happen here under the coalition’s watch”, Mr Foh-Amoaning emphasised.

Highlighting the negative effects of homosexuality and lesbianism on schoolchildren, Mr Foh-Amoaning recalled that in late 2019, individuals, groups, religious bodies, political parties and some civil society organisations were up in arms over an alleged attempt by the government to introduce the Comprehensive Sexuality Education (CSE) policy as part of the basic school curriculum reforms.

According to Mr Foh-Amoaning, the Ministry of Education, following the outcry, vehemently refuted the claims adding that “the curriculum for Kindergarten to Primary Six approved by Cabinet for use in schools and published did not include the CSE”.

Responding to the government’s assurance, Mr Foh-Amoaning emphasised that, there was a subtle attempt to smuggle the CSE into the National Youth Policy.

He stressed that although the Ministry of Education and the President, Nana Addo Dankwa Akufo-Addo, gave an assurance that the CSE was not going to be part of the curriculum, the coalition was of the view that it was going to be drafted into the National Youth Policy being developed.