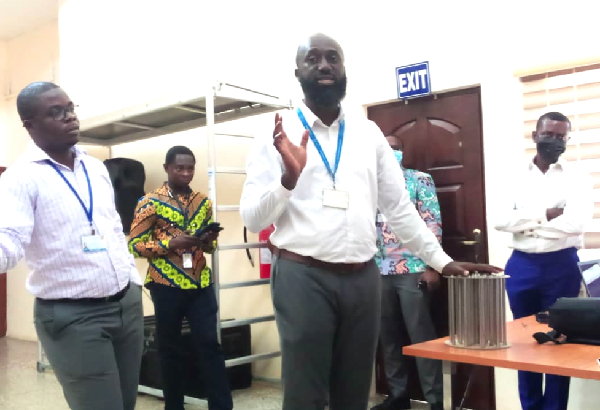 Prof. Seth Kofi Debrah, Director of the Nuclear Power Institute of the Ghana Atomic Energy Commission, addressing the journalists during the tour of the commission
30.5k Shares

The Director of the Nuclear Power Institute of the Ghana Atomic Energy Commission (GAEC), Prof. Seth Kofi Debrah, has advised x-ray technicians to be mindful of the weight of clients before exposing them to the required radiation.

He said it was necessary that anyone seeking x-ray services checked his or her weight first because the radiation they would be exposed to during an x-ray shot must correspond with the weight of the client.

He said exposing a person to multiple radiation could affect the cells of a person.

He said x-rays were controlled by MA and KV settings that were weight dependent.
Prof. Debrah said that during an interaction with journalists who toured the GAEC as part of a three-day training programme.

The training was organised by the institute to sensitise journalists to issues concerning nuclear power.

Prof. Debrah said there were scales within facilities where x-rays were taken for people to check their weight.

“If you get it perfect, you would get a perfect x-ray. But if you don’t and you keep shooting, one two and three times, you are actually affecting the cells of the person. That is why it is important that you check the weight of the person before you give the x-ray,” he said.

“Radiation itself is not dangerous, but there is a tolerance level for radiation that you should not get to, and that is what we are advising people on. In our services and our works, we try not to get even close to the tolerance levels of ourselves,” he said.

Prof. Debrah also advised persons using microwave facilities not to get closer to them when they were in use.

The microwave, he said, worked in certain ways that included being magnetic that was associated with some radiation.

“That is why we say when a microwave is operating don’t stand in front of the microwave,” he said, adding “keep your distance from sources. Don’t spend too much time around sources, and if you have any form of shielding, use it”.

At the closing session of the training, the Director-General of the GAEC, Prof. Samuel Dampare, said journalists were a major stakeholder in the nuclear agenda of the country.

He expressed the hope that journalists and the media would help to propagate the activities of the commission.

The Executive Director of Nuclear Power Ghana, Dr Stephen Yamoah, said the workshop should demystify some of the perceptions about the issue of nuclear power.