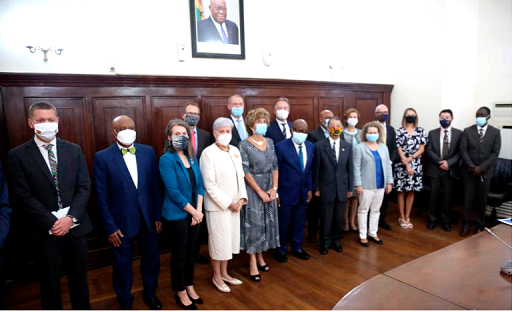 The Speaker of Parliament, Professor Aaron Mike Oquaye, has urged development partners and developed nations to consider cancelling debts of African countries in the wake of the COVID-19 pandemic.

He said there was an urgent need for debt cancellation since African countries were facing challenges with health financing, shortfalls in petroleum, slowdown of foreign direct investments, reduction in trade volumes, decline in international price of crude oil, exchange rate volatility, and debt service difficulties as a result of the pandemic.

He made the call when he held deliberations with a cross section of development partners, ambassadors and international representatives on finding ways to forgive Africa’s debt in the face of the COVID-19 pandemic and the challenges that African economies, in particular, had had to endure.

Twenty-two African countries have debt-to-GDP ratios of over 60 per cent, the threshold set by the African Monetary Cooperation Programme for prudent debt levels.

In the wake of the pandemic, the World Bank forecasts that sub-Saharan Africa will collectively fall into recession for the first time in 25 years.

The World Bank statistically projects that between 26 and 39 million people in the region are at a high risk of falling into extreme poverty.

The Jubilee Debt Campaign Report also indicates that 20 African countries now face increased difficulties, with 50 per cent of African countries spending more on debt repayments than they do on healthcare and education, two key sectors for human capital development.

Prior to the pandemic, the debt levels of numerous African countries were reaching unsustainable levels. According to information from the IMF, debt-to-GDP ratios in African countries have increased from an average of 43 per cent to 62 per cent from 2013 to 2018.

Prof. Oquaye, who spoke on behalf of the Conference of Speakers and Heads of African Parliament (COSAP) at the meeting with the diplomats and development partners, said in the light of global advocacy efforts, the establishment of a more cohesive pan-African parliamentary voice to support the global and regional campaigns for Africa’s debt cancellation had become imperative.

The Japanese Ambassador to Ghana and Chairman of Heads of Mission of Development Partners, Mr Tsutomu Himeno, said developed nations were open to discussing debt cancellation for Africa, taking into consideration the total sum of the COVID-19 pandemic on all countries in the world.

The American Ambassador to Ghana, Mrs Stephanie Sullivan, referred to the interventions of the Highly Indebted Poor Countries programme and how those were to cure the ills of debt burden in African countries.

The American ambassador urged African countries to refer to the lessons learnt from that intervention to avoid future occurrences.

The formation of the Conference of Speakers and Heads of African Parliaments (COSAP) was proposed by the Speaker of the House of Representatives of Nigeria, Rt Honourable Femi Gbajabiamila.