Business activities bounce back in Kumasi 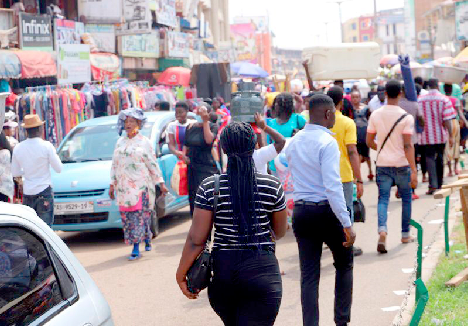 Some residents of Kumasi going about their normal duties
30.5k Shares

Business activities in the Kumasi metropolis have bounced back after the lull resulting from the general election.

From last Monday when the elections were held through to Wednesday, the metropolis remained quiet as residents waited for the results of the elections.

With the declaration of the presidential results by the Electoral Commission (EC) last Wednesday evening, life returned to the city.

Yesterday morning, shops and offices became fully operational, which also resulted in both human and vehicular traffic in the central business district.

Most of the traders and shoppers who spoke to the Daily Graphic, explained that from election day, they stayed at home following proceedings after the voting and luckily with the EC declaring the results, it was an opportune time for them to go about their usual daily activities.

The traffic situation in town was heavy, as a journey which could take one barely 30 minutes took virtually an hour or two.

People had little or no option but to compete with vehicles on the road.

Around the Kejetia roundabout, people walked on the green grass.

City guards of the Kumasi Metropolitan Assembly (KMA) had a hectic time trying to manage the gridlock.

Sellers of food items had a field day perhaps because many residents had run out on their stock.
Many traders made good sales.

Some shoppers told the Daily Graphic that prices of commodities such as cassava and cocoyam soared, which they least expected.

Some supporters of the New Patriotic Party (NPP), clad in party colours were on the streets of Adum, jubilating.

With the aid of loud speakers and brass band, they danced to express their satisfaction with the election results.