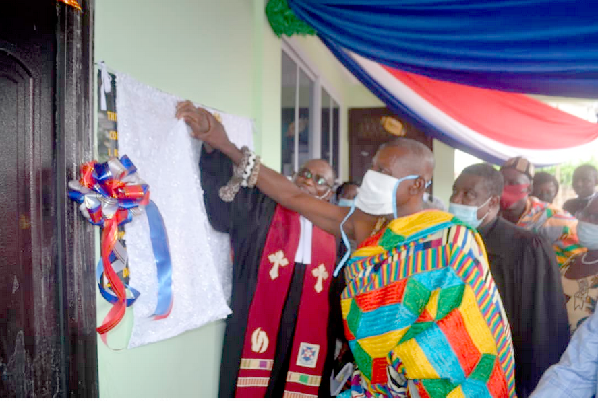 The Bethel Congregation of the Presbyterian Church of Ghana located at Salem, a suburb of Agona Swedru, last Sunday held a thanksgiving service to dedicate its newly constructed manse with an office complex.

The project was constructed at a cost of GH₵245,000 and funded from financial contributions from its German partners from the Protestant Church of Palatinate, Bohenhiem-Rohxiem, Germany, as well as contributions of members of the church.

On June 20, 2010, Agona Swedru was hit by a heavy flood after the Akora River overflowed its banks causing havoc to many buildings and facilities close to the river including the Salem area.

As a result, two mission houses, the church building, constructed many years ago, as well as a six unit classroom block of the Presbyterian basic school, were heavily affected. After the flood subsided a few days later, it was detected that the old manse had developed serious cracks making it unsafe for habitation.

On March 18, 2011, the then Central Presbytery Chairperson, Rev. Newton Asare Akoto assisted by the Swedru District Minister, Rev. Gabriel Walanyo Nugba and other reverend ministers cut the sod for the construction of the new manse which was eventually completed in the last quarter of 2020  .

Delivering the sermon on the theme: “Celebrating the goodness of God”, the Central Presbytery Chairperson, Rev. Alex Owusu-Addo, noted that despite the disaster that hit the church 11 years ago, God Almighty had been good to the church through thick and thin.

He said God’s goodness had been with the church since the tragedy struck the church and through His mercies and directions, the church had been able to construct a new edifice to His glory”.

Rev. Opong-Wereko urged the leadership of the church to properly nurture the youth to take up key roles in God’s ministry, saying “it is important that the youth are allowed to grow in the church to contribute to its growth”.

He equally advised the youth to allow themselves to be groomed spiritually so as to be well-positioned to assume challenging leadership positions in the church in the future, noting “you must be ready to under-study the current leadership in order to fit into their shoes in their absence”.

In an address on his behalf, the Chief of Agona Swedru, Ogidigram Okrupi Nana Kobina Asiedu Botwe II, who was the Special Guest of Honour, commended the church and its partners for reconstructing the old manse which was affected by the 2010 flood.

He further lauded the church for its role in the provision of education and health which had augmented the efforts of government, saying “there is no doubt that the Presbyterian Church is a great partner in the growth and development of the nation”.

“I wish to urge the church to turn its attention to basic schools in particular so as to improve the learning environment to enhance teaching and learning for the benefit of the  pupils” he said.

He further urged the church to intensify the teaching of their values and principles in their mission schools towards producing responsible adults who would make meaningful contributions to the nation’s growth.

In a welcome address, the District Minister, Rev. Daniel Opong-Wereko, expressed gratitude to the members of the church and partners for their sacrifices and commitments towards the completion of the project.

“We have gathered here today to celebrate the wiping off of our 11 years tears when the flood heavily affected our old manse as we dedicate the new manse and the office complex” he stated.

The Medical Director of the Trauma and Specialist Hospital, Winneba, Dr George Kwame Prah, who chaired the occasion, while commending the members, urged them to continue to play active roles towards the growth of the church.