Bagre Dam spillage: Lives under threat in the north 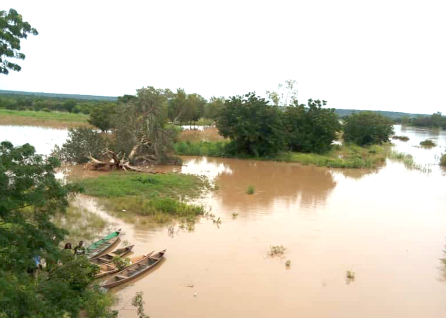 A flooded area in one of the affected communities
30.5k Shares

A humanitarian crisis is looming in a number of communities in northern Ghana, particularly areas along the White Volta and the Black Volta, following the spilling of excess water from the Bagre Dam in Burkina Faso.

“Swathes of farmlands have been consumed by flood waters and lives are under threat. The situation is very bad,” the Director-General of the National Disaster Management Organisation (NADMO), Mr Eric Nana Agyemang Prempeh, told the Daily Graphic yesterday.

He added, however, that no life had been lost.

He could also not readily provide figures on the number of displaced persons and the extent of damage to farms and property.

The NADMO boss said the water level was very high, saying: “It’s 100 per cent, which has been compounded by the flooding of rivers following heavy rains in the north.”

In spite of that, he gave an assurance that his outfit was working extra hard to mitigate the plight of those affected by the situation.

NADMO on the ground

“Our team is on the ground working very hard and I just returned from the area to work on additional relief items for displaced people,” Nana Agyemang Prempeh stated.

Before the spillage last year, NADMO had estimated that over 200,000 people in communities along the White Volta and the Black Volta were expected to be affected.

As has become the tradition, NADMO issued a flood alert ahead of the opening of the dam this year and warned residents along the two rivers that the combined effects of rising water levels in the White Volta and the opening of the dam could leave thousands of people affected by flooding and, therefore, urged the residents to move their valuables to higher ground for their safety.

It said it was collaborating with various bodies, including United Nations (UN) agencies, the 48 Engineers Regiment of the Ghana Armed Forces (GAF), the Police Service, the Fire Service, the National Ambulance Service, the Meteorological Service Department and district assemblies in the affected communities, to help mitigate the effect of the spillage on the people.

Already, some farmers in some communities in the Talensi District in the Upper East Region have begun experiencing the effects of the spillage.

According to the Talensi District Coordinator of NADMO, Mr Mahama Ken Kazar, about 700 farmers in 11 communities in the district had had their farmlands submerged, while about 2,700 acres of farmlands, made up of maize, millet, rice and yellow melon, had been submerged.

Mr Kazar "normally when the dam is , our farmers start seeing visible signs of it when it reads 650 centimetres on the White Volta River gauge”.

He indicated that last Sunday, the water level read 829 centimetres, adding that as of yesterday the level on the gauge read 870 centimetres.

The coordinator explained that if the level rose above 920 centimetres, it would lead to further disaster.

The situation, he claimed, had been exacerbated by torrential rains which, on August 7, in particular, flooded many farmlands.

One of the affected farmers at Pwalugu, Mr Vincent Atinga, told the Daily Graphic that all his crops were submerged with just about two weeks for him to harvest some of the crops.

A 25-member team of experts and technical people has been deployed to the Northern and the Upper East regions in an operation code-named "Thunderbolt" to ensure that rescue missions are successfully carried out.