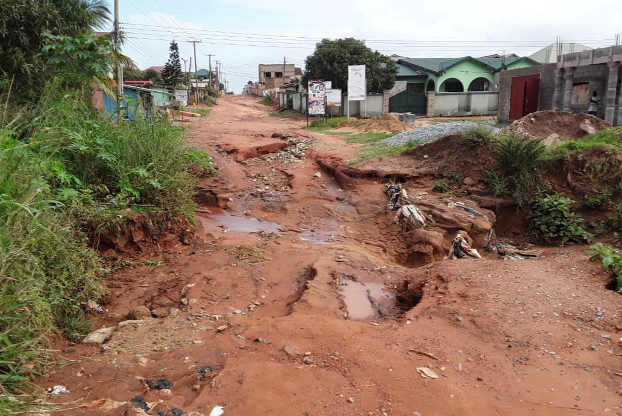 A stretch of the road linking to Redtop
30.5k Shares

The recent rains that hit parts of the country have further deteriorated the road networks at Reptop behind the West Hills Mall in the Ga South Municipality.

The situation has left most of the roads linking to and from the area impassable.

In view of the situation, residents of the area have made a passionate appeal to the government to address the problem as well as extend pipe-borne water to the area.

According to the Chairman of the West Hills Landlords and Residents Association, Mr Wiredu Antwi, residents had in the past made contributions to put the roads in good condition.

However, the recent rains, especially last weekend’s rains, he said had washed off everything that had been done.

He noted that the members in the area had drawn the attention of their Member of Parliament to the poor state of the road but nothing had been done to improve it.

“We have written countless letters to the assembly but we are not getting results and that is why we are appealing to the central government,” he said.

He indicated that because of the poor state of the roads, residents always had to make a detour into an area surrounded by bushes “which is not safe because you don’t know who is hiding into those bushes.”

“Now we have abandoned the main road because it is impassable and have resorted to using a detour through bushes, risking our lives. The roads are so horrible with gulleys. Over the years we have used our own resources to improve the road but now it has deteriorated beyond our capacity because there is no way we can mobilise resources and fix it. That is why we are asking for a higher authority, the government, to come to our aid and fix the roads,” the chairman said.

Mr Antwi said the government could adopt short, medium and long-term plans to work on the roads or it could also impress upon the companies in the area to do something about the situation as part of their corporate social responsibilities.

Regarding the short-term measure, he said for instance that there were lots of laterites in the area and that they could be used at least to fill the gulleys and make the roads motorable until a permanent solution could be found to the problem.

He said the roads were not only important to residents alone at Redtop but those coming from Kasoa as well since they could use that route to connect to Bortiano through to Accra whenever the SCC and Old Barrier stretch was flooded during a downpour.

“In case there is an emergency and the SCC and Old Barrier stretch is blocked, vehicles can use this place as a detour through to Bortiano and then get to Accra,” he added.

In addition to the problem with the roads in the area, he said another issue was the lack of potable water at Redtop.

He said every household was made to contribute GH¢400 for pipes to be laid for the extension of water to the area but after doing that the water was diverted to another place.

“We raised our own money to lay the pipes to this community up to a point. However, the water has been diverted to another source and we have pictures to that effect,” he said, adding that “we are appealing to the President to come to our aid.”

He expressed the hope that the government would listen to their plea and come to their aid within the shortest time possible.

Adding his voice to the situation, the Secretary of the Seaview Land Owners Association, Mr Isaac Obeng, said the road at the Pentecost Junction was in a terrible shape and thus needed urgent attention.

According to him, the poor road network in the area had impeded the smooth flow of vehicles, adding that the government should also extend the year of roads initiative to the area.

“It is just unbearable driving on the road,” he said.

For his part, the Secretary of the West Hills Landlords and Residents Association, Dr John Agyemang Boateng, said as part of their own contributions as responsible citizens, last year they mobilised some GH¢14,000 to do something about the road.

“So, on our own we are doing our best but we would need the support of the government. That is all we are asking for,” he said.

He dismissed the suggestion that residents were using the upcoming elections to put pressure on the government, adding that their problem was a genuine one that needed urgent attention.

Another resident, Mrs Doreen Forson, said the regular flow of water was critical to fighting pandemics such as the COVID-19.