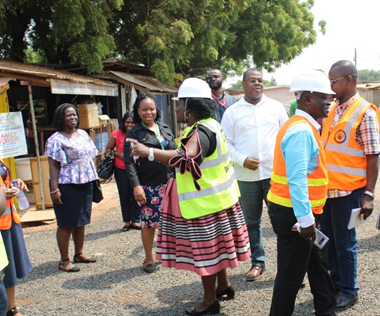 The projects include the construction of a five-kilometre road in the municipality which was funded from the Internally Generated Funds (IGF).

Leading a team from the municipality on the tour Tuesday, May 11, 2020, Mrs Owusu-Ahinkorah inspected the construction of a 450-metre section of the Pawpaw Street at East Legon as part of the local roads project of the urban roads department.

Briefing the team on the status of the road project, the Municipal Urban Roads Engineer, Mr Domingo Lekettey, stated that currently the roads are being re-shaped and gravelled and will be completed soon for use.

A five-kilometre road at Kwabla Avenue in Shiashie which was commissioned in September 2019 was also inspected.

Two new pick-ups were also commissioned at the assembly premises by Mrs Owusu-Ahinkorah.

She stated that the cars were to assist the staff to execute their duties effectively and efficiently to help the assembly meet its set target.

She also advised that proper maintenance schedules should be put in place to increase the lifespan of the vehicles.