BY: Nana Konadu Agyeman
Category: General News
Mame Kyeiwu (left) holding her left shoulder which was injured by the falling wall during the storm while Mr Quayson commiserates with her Follow @Graphicgh

Mame Abena Kyeiwu, an 87-year-old blind woman, feels lucky to be alive after a heavy rainstorm hit Assin Anhwiasu in the Central Region.

The frail-looking incapacitated mother of five was struck by a falling concrete block on her left shoulder while lying on her bed.

Her one-bedroom house was struck by flying debris carried by the rainstorm at 5 p.m. on February 17, 2022.

The debris, a hefty corrugated roof, ripped off from a nearby building, crashed into her building, an impact that caused part of her room to cave in.

She was unable to flee the danger nor scream for help, but lay on the floor of her room groaning in pain.

She was spotted by some young men who were moving round the neighbourhood to aid those who were trapped in their houses and was taken to safety. 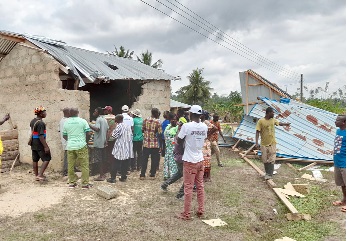 The damaged single-room of Mame Kyeiwu, by a flying roof

“We saw Mame Kyeiwu lying motionless on the floor and groaning in pain when we got to her house,” Kwame Fosu, one of the youth who went to rescue her, told the Daily Graphic.

Mame Kyeiwu, who stayed alone, lost almost all of her valuables (mainly clothes) in the storm. She is currently putting up in a thatched house that belongs to one of her children who is a farmer.

Sadly, Mame Kyeiwu currently sleeps on a bare floor, a situation that is detrimental to her already fragile health.

Her home was one of the over 70 buildings, both concrete and thatched, in the cocoa-growing community that were destroyed by the winds.
Schools and churches were not spared, while a number of trees in the communities such as coconuts and oranges were uprooted.

The disaster, said to be the first of its kind to plague the poor community, left over 200 persons homeless.
Presently, most of the displaced persons are staying with their families and friends within and outside the area.

These emerged when the Member of Parliament (MP) for the Assin North Constituency, James Gyakye Quayson, visited the affected areas in the community to assess the extent of damage caused by the rainstorm.

The MP, who had gone to provide bags of cement, packets of roofing sheets and an undisclosed amount of money, was taken round the affected areas by the officials of the National Disaster Management Organisation (NADMO), the Assembly member for Assin Anhwiasu, James Coffie, and the chiefs and elders on Monday, February 21, 2022.

During the tour, the devastation caused by the rainstorm in the community was glaring. It had left huge piles of trash across the community.

At the Maridan Victory International School, for instance, the storm ripped off the roof of most of the classrooms from kindergarten to Junior High School.

What the teachers, students and pupils salvaged were dried in the sun on the school’s compound. Schoolchildren were also cramped into two of the classrooms that were not affected.

“It is the first time we have witnessed such a heavy rainstorm in our school. We were not able to come to school on Friday after the disaster, but today we have managed to get two classrooms for the pupils and students from kindergarten up to JHS 3,” the Head Teacher, Francis Annan Kwame, said.

During the visit, Mr Coffie, the Assembly member, said the rainstorm destroyed quite a number of streetlights in the area and damaged bulbs.

“This has never happened in our community before,” he said.

Corroborating, the Chief of Assin Anhwiasu, Nana Yaw Panyin Ababio II, also described the disaster as “first in the history in our life.”

He, therefore, appealed to the MP, who donated all the streetlights, to help get them replaced immediately to improve on security in the community.

Mr Quayson also expressed surprise at the extent of damage caused by the rainstorm and pledged to support victims to get back on their feet.

He also expressed his commitment to work with other stakeholders such as the NADMO and other well-endowed individuals to bring more relief items to the people.

"I pledge to go all out to help reconstruct the home of Mame Kyeiwu and ensure her proper upkeep to bring the smile back on her face,” he promised.