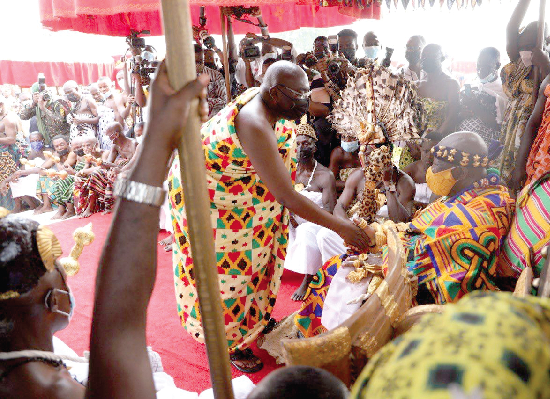 The chiefs and the people of Asanteman last Saturday joined the Asantehene, Otumfuo Osei Tutu II, to celebrate the last Akwasidae of 2021 at the Manhyia Palace.

The Akwasidae, which occupies a significant place on the Asante traditional calender, is a festival of propitiation and worship of ancestral spirits.

It is celebrated once every six weeks on a Sunday.

Although every paramount chief in Asanteman observes the day in his own jurisdiction, the main event is held at the Manhyia Palace, where the Asantehene sits in state for his subjects and other well wishers to pay him homage.

The last Akwasidae of the year, known as the Adae Kese Festival, is commemorated with food offerings and donations to the poor and the needy.

The colourful event was marked with a display of the rich culture of Asante — drumming, dancing, the firing of muskets and the showcasing of different brands and sizes of Kente cloth.

Otumfuo Osei Tutu, in whose honour the durbar was held, arrived in a palanquin, followed by a large retinue of chiefs and courtiers and security detail.

The event was witnessed by the Vice-President, Dr Mahamudu Bawumia, and his wife, Samira.

There were also Ministers of State, Members of Parliament, political party representatives, people from academia and the business community.

Also present were the Inspector General of Police, Dr George Akuffo Dampare; the Director-General, Legal and Prosecutions of the Ghana Police Service, Commissioner of Police Mr Nathan Kofi Boakye, and some heads of the other security services and the public.

The Chief Executive Officer of Gold Coast Refinery, Dr Said Deraz, said the buzz and the personalities associated with the Akwasidae were synonymous with the pride of place Otumfuo Osei Tutu occupied in Ghana’s history.

According to him, it was most appropriate to celebrate the Asantehene in grand style, given his outstanding leadership in the country.

According to him, the refinery had received the licence from the Bank of Ghana to mint commemorative coins to celebrate and honour the Asantehene as “a pillar of peace”.