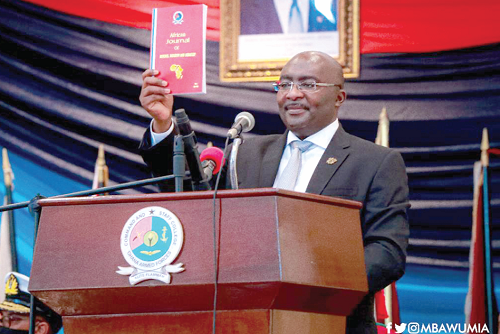 The Ghana Armed Forces Command and Staff College (GAFCSC) has unveiled its maiden academic journal to serve as a channel of academic communication.

The journal which is titled: “The African Journal of Defence, Security and Strategy”, and compiled and edited by the college can also be accessed on www.ajodss.com.

The Vice-President, Dr Mahamudu Bawumia, launched the journal at the seventh congregation of the GAFCSC at Burma Camp in Accra yesterday.

The event also marked the joint graduation of Senior Command and Staff Course 42 and Master of Science (MSc) Degree in Defence and International Politics.

The graduands consisted of 81 military officers, made up of 59 Ghanaians and 22 others from neighbouring African countries.

Dr Bawumia said although the college had since 1963 produced professionals of diverse nationality, career and linguistic backgrounds who had and continue to significantly influence development beyond the African continent, those contributions were hardly traceable because the college lacked a dedicated channel of academic communication.

He said the GAFCSC had contributed immeasurably to existing knowledge and scholarship not only in the fields of defence and security, but in other sectors of development.

“It is for this reason that I am excited to launch the first-ever academic journal of this centre of excellence; the first in the sub-region and only next to the Scientia Militaria-South African Journal of Military Studies by the South African Military Academy, which is part of the Faculty of Military Science of Stellenbosch University,” Dr Bawumia added.

According to the Vice-President, the maiden edition of the journal was a clear sign that the GAFCSC was growing in intellectual capacity.

He, therefore, urged the college to ensure that the journal met the highest global standards through continental and global peer reviews.

The Vice-President said terrorism and piracy had become major security threats in Africa and that it would require collaboration at all levels and among countries to completely eradicate it.

“This course has given you an excellent platform to share knowledge and experience in the fight against these emerging and pervasive threats.

“We at the strategic policy level will do all we can, but you are the professionals with the requisite skills and knowledge. I, therefore, charge you to work together with a common public purpose as comrades confronting a common enemy,” he said.

Dr Bawumia also gave the assurance that the government would continue the physical infrastructure expansion programme at the Ghana Military Academy to enable GAFCSC to clear a backlog of officers who were waiting to enrol in the junior and senior staff courses.

He added that the Minister of Defence would liaise with GETFund to ensure the completion of a 54-unit four-storey students’ accommodation for the college.

In his annual review, the Commandant of the GAFCSC, Rear Admiral Moses Beick-Baffour, said 2026 was the deadline for the college to get a charter to become autonomous and gave the assurance that all efforts would be made to achieve that feat.

He also announced that the college intends to introduce a Doctor of Philosophy (PhD) in Defence and International Politics as well as a Master’s programme in Security Studies.

Rear Admiral Beick-Baffour further announced the introduction of a new five-year strategic plan for the college.

An officer of the Ghana Army, Major Peter Afreh, who emerged as the Overall Best Student, received the Honour Graduate Award which is also known as the Minister of Defence Prize.

He received a book, a shield, a 43-inch television and a giant trophy.