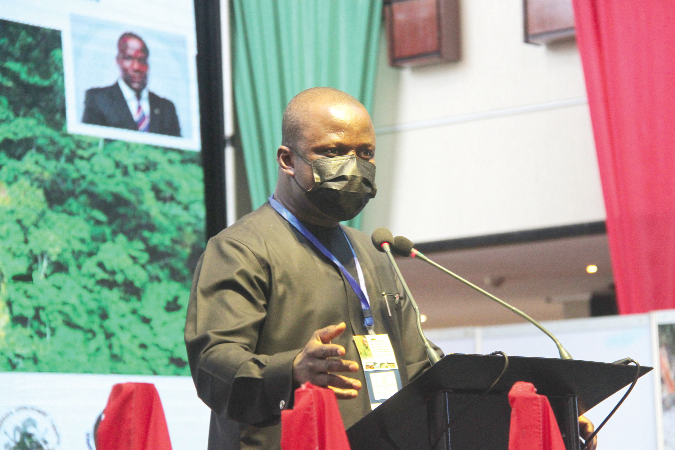 Mr Samuel Abu Jinapor, the Minister for Lands and Natural Resources, giving the opening remarks on the second day of the National Dialogue on Small Scale Mining.
30.5k Shares

The National Consultative Dialogue on Small Scale Mining has called on the government to take steps to put in place systems for the rigid application of the laws against illegal small-scale mining.

A 15-point communique read on Thursday, April 15, by the Minister of Lands and Natural Resources, Mr Samuel Abdulai Jinapor, at the end of the two-day meeting stressed that sanctions and penalties imposed by the Minerals and Mining (Amendment) Act, 2019 (Act 995) should be applied to all those who infringed the law, irrespective of political colour, socio-economic status or class.

Indeed, it said, the better placed in society and who ought to know better should have the most punitive of the penalties applied to them.

The communique described illegal mining, popularly known as galamsey, as a national emergency that required urgent and concerted effort.

It, therefore, called on all political parties, stakeholder groups and individuals to join “the development and execution of this national, not parochial, agenda to rid ourselves of the long-standing issue of illegal small-scale mining and the need to implement measures to eradicate it from our society”.

The dialogue was opened by President Nana Addo Dankwa Akufo-Addo last Wednesday, during which he called for an impartial and non-partisan dialogue for the country to reach a consensus on a sustainable method of mining minerals.

The communique acknowledged the notable contribution of the small-scale mining sector to at least a third of Ghana’s gold production and 100 per cent of diamonds in recent years.

It also saw it as a major source of supply for development minerals such as clay, kaolin and limestone.

In so doing, the sector had been the main source of livelihood and economic activities in some remote and deprived areas, it conceded.

“Galamsey has caused the worst forms of pollution and contamination of water bodies, in a lot of instances the turbidity, rendering them unsuitable for domestic use and even for treatment by the water company, and sometimes made toxic with chemicals such as mercury and cyanide.

“The dialogue, however, notes regrettably that some unsustainable practices in the operations of the small-scale mining sector cause major health and safety challenges, leading to preventable and, therefore, unacceptable frequent accidents, injuries and fatalities,” the communique pointed out.

It said galamsey had led to the degradation of lands, in many cases leaving numerous uncovered, dangerous water-filled pits scattered over the landscape, making it unsuitable for agricultural or any other uses, as well as unsafe for both human and animal occupation.

It also came with atmospheric pollution, laden with dust, smoke and chemical pollutants such as mercury fumes, it pointed out.

“The dialogue, worse still, took note of the widespread allegations of the participation of or the support accorded by people of prominence in government, the public and the civil services, traditional authorities, business leaders and other opinion leaders to these illegal mining activities, which has given credence and prominence to the activity,” it added.

The  communique, therefore, resolved that the Ministry of Lands and Natural Resources should take appropriate steps, Legislative and/or Executive action, as the case might be, to give effect to the set of measures arising from the dialogue and approved by government.

“The dialogue called on all stakeholders, all citizens and all residents, as well as visitors to our country, to be mindful of and give due regard/respect to the laws of the land to ensure peaceful coexistence for all, as well as build a solid foundation for our future, based on our natural resources, rather than waste these and destroy our heritage.

It also called for similar consultations to be held in all mining regions and districts of our country.

“Further to that, other public relations tools should be employed to generate overwhelming public support for the national policy on small-scale mining,” it said.

The communique, therefore, mandated the Technical Committee, headed by the Member of Parliament for Atwima Nwabiagya North and former Deputy Minister of Lands and Natural Resources, Mr Benito Owusu-Bio, to come up with a comprehensive report which reflected the detailed conclusions of the dialogue.

The report will be tabled before the Cabinet for its examination and adoption to make it a policy of the government.