Akufo-Addo to swear in Jean Mensa as EC Chair today 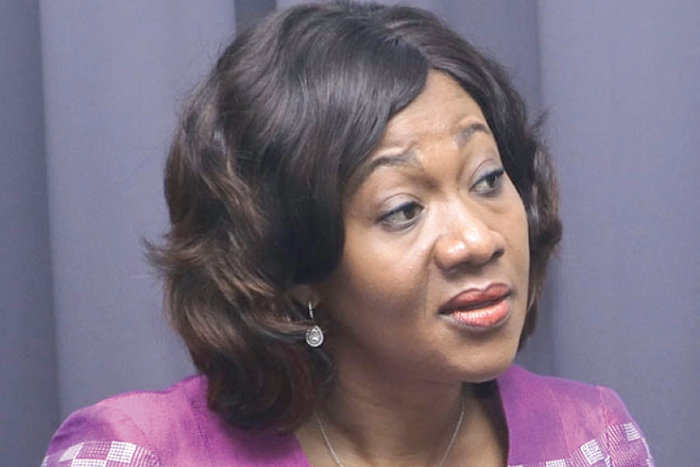 Barring any last minute changes, President Akufo-Addo will today swear in Jean Adukwei Mensa as the new chairperson of the Electoral Commission, Graphic Online has gathered

to be sworn into office today is Mr. Samuel Tettey and Dr. Eric Asare Bossman as the two new deputies, and Ms. Adwoa Asuama Abrefa as a member of the Electoral Commission.

Charlotte Osei and her two deputies, Amadu Sulley and Georgina Opoku Amankwaa were removed from office as chairperson and deputies on Thursday, June 28, by President Akufo-Addo.

This was after a Committee established by the Chief Justice, Justice Sophia Akuffo, found them to be incompetent, guilty of and breach of procurement laws in the award of several contracts and subsequently recommended their removal from office.

Again, the retirement from office of Mrs. Pauline Adobea Dadzawa, a Member of the Commission, on Monday, April 30, also required the appointment of a new person to fill the vacancy in the Commission.

President Akufo-Addo following the removal nominated the four new persons and forwarded their names to the Council of State for advice in line with the 1992 Constitution.

The Council of State last week forwarded its advice on the four nominees to the Presidency and Graphic Online gathers the Council gave the green light for the appointment.

A Chief of Staff,  Samuel Abu Jinapor speaking in a radio interview on Joy FM's Newsfile programme at the weekend confirmed that the advice from the Council of State had been received.

An attempt by a Ghanaian citizen, Fafali Nyonator to injunct President Akufo-Addo from appointing a replacement for the removed EC commissioners pending a hearing was thrown out by the Supreme Court on Tuesday.

Fafali Nyonator has filed a suit at the Supreme Court challenging the removal of Charlotte Osei, saying it was "unlawful" and therefore wanted the Supreme Court to stop President Akufo-Addo from going ahead to appoint a new person to fill the vacuum until the final determination of the case.

But in a ruling Tuesday, July 31, a seven-member panel of the Supreme Court unanimously dismissed the interlocutory application.

The court held that the application was not necessary because the court had the power to nullify the appointment of Jean Mensa if the substantive case succeeds.

Such powers, the court held, was grounded in Article 2 clause 2 of the 1992 Constitution.

on of EC Commissioners

It adds: "(2) The President shall, acting on the advice of the Council of State appoint the Chairman, Deputy Chairmen and the other members of the Commission."

This means that the appointment of EC Commissioners does not require Parliamentary approval and therefore once the Council of State gives the green light on the nominees, the President can go ahead, make the appointment and swear them into office.

In a comment after the Supreme Court had thrown out the injunction application on Tuesday, Deputy Attorney General, Godfred Yeboah Dame said an announcement from the Presidency on the way forward regarding the Electoral Commission was to be expected within 24 hours.