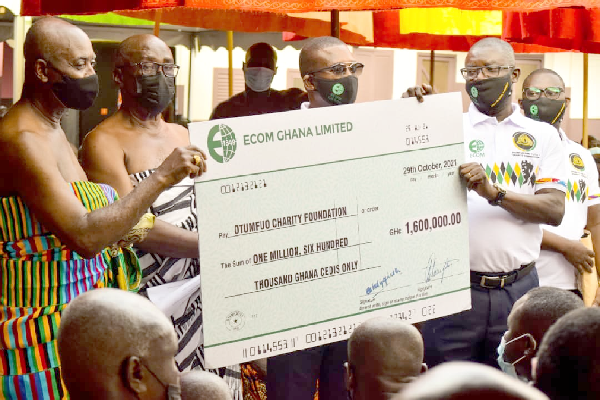 Agroecom, a licensed Cocoa Buying Company which operates a sustainability programme in the country has extended its support to the “Otumfuo-Agroecom Mobile Learning Project” for another four years.

The General Manager of the company, Mr Richard Suwli, who announced this explained that the new sponsorship, which is between the periods October 2021 to August 2025, had a sponsorship package of GHC1.6 million.

He stated that the management’s decision to extend the project for another four-year time was due to the influence the project had on the targets and the benefits to Ghanaians in general.

Mr Suwli announced this when the leadership of the company presented a cheque for GHC1.6 million to the Otumfuo Osei Tutu Foundation through the Asantehene, Otumfuo Osei Tutu II, at the Manhyia Palace on Sunday.

In October 2017, Agroecom Ghana Ltd in collaboration with the Otumfuo Charity Foundation launched a project dubbed, “Otumfuo-Agroecom Mobile Learning Project” at the Manhyia Palace in Kumasi.

Benefits from the project

Over the four-year period, the project gave access to reading and practical ICT lessons to 62, 646 schoolchildren in 107 communities across 28 districts.

As an organisation focused on alleviating poverty among rural farmers, Agroecom sponsored the first phase of the project to the tune of GHC1.4 million by providing resources including a mobile van, a pick-up (4x4 vehicle), large quantities of reading and customised exercise books.

Others included 70 pieces of laptop and desktop computers, power generator set, LCD projectors, a video camera, a projector screen, a set of audiovisual materials, and an additional quarterly overheads recurrent expenditure of GH¢71,448 towards a successful running of the project.

The general manager said over the last five years, Agroecom had worked with over 140,000 farmers resulting in premium payments and community infrastructure developments of over $40 million.

He said, “as this four-year duration starts, we plan to enter into new areas aimed at giving the less fortunate children in deprived communities a similar learning condition to children in bigger communities and providing education to promote rural prosperity”.

The Board Chairman of the Otumfuo Osei Tutu II Foundation, Nana Prof. Oheneba Boakye-Adjei Woahene II, on behalf of the Asantehene, Otumfuo Osei Tutu II, lauded the management of Agroecom for the support for the past years as well as the renewal of the project for another four years.

He assured the leadership of Agroecom of Manhyia Palace’s readiness to support their operations as well as manage the resources for the project prudently to merit the purpose of its establishment.