Aftermath of rains: Sordid state of some roads in Accra 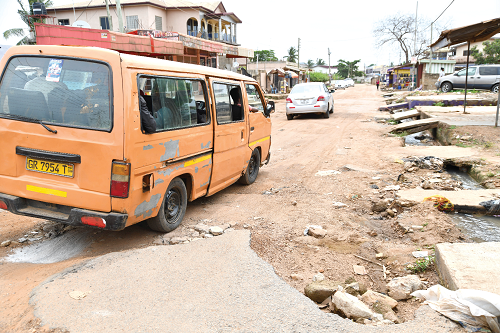 The state of roads in some parts of the Greater Accra Metropolitan Area has worsened following the recent rains, thereby affecting the smooth flow of vehicular traffic to and from those areas.

The situation has affected both tarred and untarred roads, leaving huge gullies with pools of water in some places.

In the case of some of the tarred roads, the bituminous surface has been washed off, resulting in potholes while the conditions of the untarred ones have become impassable.

Also, many have expressed concern about the quality of work done, particularly, on roads that were fixed not too long ago, but have also been affected.

Some of the areas that have been worse affected which the Daily Graphic has toured included roads in the Teshie township in the Ledzokuku Krowor Municipality, Tuba Junction and Kings Town (Ngleshie Amanfro), Oshieyie and Bortianor, all in Ga South and Kwashiebu in Ga Central.

From Teshie, Emmanuel Bonney reports that the rains have left most of the roads with potholes and gullies, thereby impeding the smooth flow of vehicles.

During a visit to the area, it was realised that work had stalled on the construction of some key culverts which has compelled drivers to use alternative and longer routes to their destinations.

At the Fourth Avenue Estates, for instance, a key culvert linking 10th Avenue to Accra, among other places, was yet to be fully completed as piles of laterite could be seen on one side of the project.

Close by were abandoned buildings with some cracks while portions of the road had been washed off.

Also at the Fourth Estates Extension, the stretch to Accra and other places had been cut off during the visit following the demolition of another culvert for reconstruction. 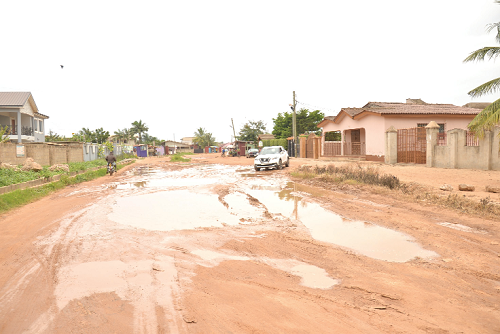 Some residents who spoke to the Daily Graphic said the situation had become a source of concern as they became scared whenever they saw the clouds gathering, because once there was a downpour, the place would get flooded.

One resident, Madam Charity Achab, said at a point she had to relocate to Tema because of the threat of flooding anytime it rained.

“Because of the flooding I had to relocate to Tema. I have changed my car engine a number of times because of damages caused by flood waters,” she said, and called for speedy completion of the culvert, opening up of gutters and the re-tarring of the road.

Another resident, Mr Thomas Oheneba Duffour, wondered why works on the culverts had not been completed.

“We have suffered a lot from flooding in this area over the years. They started construction in May and said it would be completed by June ending, but up until now they have not finished,” he lamented.

At the Malik Taxi Station, some taxi drivers also complained about the rough nature of the road they plied their vehicles on, adding that because of that they always had to go for maintenance in order to keep their vehicles in good condition.

One of the taxi drivers, Mr James Anyah, said until last two weeks when the Member of Parliament, Mr Ben Ayiku Narteh, sent a grader to the area to level the road, the place was in a bad condition.

“When it rains we can’t sit here, some of us do not even operate because the place becomes flooded. They have done the gutters and I think that by now they should have done the road,” he said.

It was realised that in some of the areas, especially around Coffee Street, young men had taken it upon themselves to fill the potholes and they were seen soliciting for money from motorists for the work done.

According to them, having realised the poor state of the road, they had to take it upon themselves to make it a little bit manageable for vehicles to move about.

With no job, they thought that was a way to make some small living.

The Assemblyman for South Teshie Nungua Estates, Mr Tahiru Alhassan, said reports on the state of the roads had been forwarded to the Ledzokuku Municipal Assembly for action.

When contacted, the Ledzokuku Municipal Assembly Chief Executive, Mrs Evelyn Naa Adjeley Twum-Gyamrah, told the Daily Graphic that works on the improvement of roads in the area were ongoing.

“We are working on the roads. For instance, the patchings are ongoing,” she said, and cited the Century Road through the LEKMA Hospital as one of the roads which were being worked on.

She again cited work on another major culvert near the Ghana National Association of Teachers (GNAT) Hostel which was under construction, saying that they were all aimed at improving the roads in Teshie.

Meanwhile, the road at First Light near the Kaneshie Market is being asphalted after about two years when work on the underground drainage was completed.

The work left part of the road, especially at the traffic light on the stretch on the old overhead bridge in a bad state with huge potholes.

The situation always led to traffic build-up in the area. However, with the commencement of work, the traffic situation has since improved.

Ngleshie Amanfro, the western gateway to the nation’s capital, Accra, and also the last community from the capital towards the Central and Western regions is an apology of itself with respect to roads, Christopher Nunoo reports.

Carved out of the then Weija-Gbawe Municipality which included Sowutuom, Anyaa, Weija, Gbawe and other adjoining communities, many saw the creation of the new municipality as a blessing in disguise with the hope that it will lessen the burden on the assembly to tackle its incessant developmental hurdles.

Presently, the Ngleshie Amanfro section of the municipality is crying for roads unlike the Bortianor section which has seen some remarkable improvement.

Of particular significance is the road from the Ngleshie Amanfro junction through the chief’s palace area to the “Fear God” area through Kingstown (Black Gate) to “Brother Lee” which joins the café junction road connecting the Obom road.

Aside from the tarred roads leading to Top Town and Galilea in Ngleshie Amanfro, the whole community cannot boast of any dignified road even though many residents believe when the roads in the community were properly laid out, it would ease, significantly, the burden of road users on the Kasoa section of the main Accra-Cape Coast road.

At Oshiyie and Bortianor the roads connecting those areas are in a bad shape. The only road that is tarred is the one from Old Barrier to Aplaku. However, from Aplaku the road has developed potholes. Two sections of the road have also been eroded, leaving a small portion for vehicles to use.

The situation sometimes results in traffic at that section as vehicles going to and from Oshiyie scramble to use the passable portion of the road that is left.

The bad nature of the road around Kwashibu in the Ga Central municipality has put severe pressure on the Santa Maria Kwashieman Road as all vehicles avoid all the adjoining links to join that road because of their bad nature.

From Hong Kong through to Rect Academy to Kwashiebu and Santa Maria last stop the road network is bad. When it rains, it becomes impassable.

Also, from Santa Maria through to A-Lang to the Odorgonnor Senior High School, the road is littered with potholes.

From the Ga West and Ga Central municipalities, the observation was that, generally, the roads are being fixed, albeit at a slow pace, reports Charles Andoh.

Roads including Manhean, Nsakina, Oduman, Afuaman, and Oshuman have all been fixed, making the residents heave a sigh of relief after many years of protests.

However, the Odumase to Three Junction road, Mayera and Faase roads continue to deteriorate as they have been left unattended to after many appeals from residents.

The main Joma to Ablekuma road also remains dusty, posing a lot of health risks to the residents, even though the Ga Central Municipality is making attempts to work on that stretch.