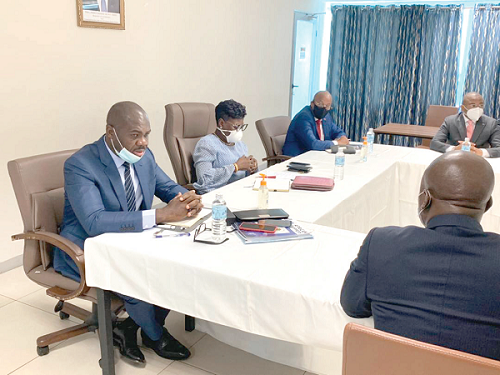 As part of the move to deepen the collaboration, an eight-member UASC delegation is in Accra on a five-day working visit to engage officials of the secretariat to help maximise gains from the initiative.

The delegation is made up of representatives from Angola, Senegal, Cameroon, Togo, Nigeria, Ghana, Benin and Congo.

It will also hold discussions with officials of the Customs Division of the Ghana Revenue Authority (GRA) and other trade facilitation agencies to help understand the system better.

Briefing the media after a preparation meeting in Accra organised by the Ghana Shipper’s Authority yesterday, the Secretary-General of UASC, Mr Giscard Lilian Ogoula, said the delegation intended to build a long-lasting partnership with the AfCFTA secretariat.

“We will need this partnership to complement our effort towards achieving the goal of the initiative,” he said.

According to Mr Ogoula, the UASC was in a better position to help the secretariat operationalise the agreement across the continent through capacity-building, trade facilitation, monitoring and evaluation, as well as data collection.

“The union can play a critical role in the implementation of AfCFTA. And to us, it is important that we meet to establish the relationship which will create the needed path to take full advantage of the gains from the initiative,” he added.

The Chief Executive Officer (CEO) of Congo’s Office for Multimodal Freight Management, Mr Patient Sayiba Tambwe, also a member of the delegation, said a well coordinated platform was needed to accelerate the projected gains of the AfCFTA.

“We need a platform where the AfCFTA and the Union of African Shippers’ Councils can work together so that shippers can share the prospects of intra-Africa trade.

“It is important to note that Africa's role in global trade is very minimal. With the coming of AfCFTA, it is critical that we increase trade among ourselves on the continent, and the council has an important role to play to ensure that it succeeds,” he added.

The Chief Executive Officer (CEO) of the Ghana Shippers’ Authority (GSA), Ms Benonita Bismarck, said the week-long engagement would also help clarify some of the challenges most countries were facing in the implementation of AfCFTA.

She said the delegation would also be sharing some good trade experiences on the continent as well as make proposals on how to surmount some of the challenges in the sector.

“East Africa has been able to ensure smooth transportation of goods from one country to another. In West Africa, that is not the case; we are counting more than 52 security barriers from Accra to Ouagadougou.

“What has been implemented successfully in East Africa can also be learnt and repeated in West Africa. These are the experiences we want to share with our engagement with the AfCFTA secretariat,” Ms Bismarck said.

She mentioned some challenges such as Rules of Origin, around which there was also a certain level of apprehension among investors as to what they were to expect in the near future.

“Members need to know the right answers to give when they are asked any of these questions,” she said.

Rules of origin are essentially the criteria for determining the nationality of a product. A good rules of origin requires that more than 70 per cent of a product being exported is made locally in the exporting country.

According to the United Nations Commission for Trade and Development (UNCTAD), rules of origin should be made simple, business-friendly and predictable for the gains expected from AfCFTA to be realised.