Accra, too vulnerable to disasters? 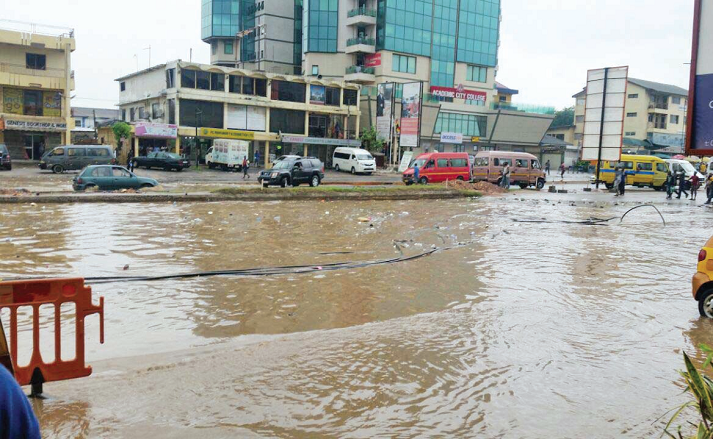 Rainwater takes over the streets of Accra
30.5k Shares

Urbanisation is a growing global phenomenon that is characterised by new opportunities and challenges. Like most African countries, Ghana is also urbanising and its urban population is likely to reach 72 per cent by 2035.  The City of Accra, Ghana’s capital, buzzes each day with business and social activities akin to any modern city. It is the most densely populated city in the country because of the influx of migrants from all over the country and neighbouring countries, who come in search of better livelihood opportunities. Consequently, Accra has grown at a record pace like many other cities in the developing world. Given the mostly unplanned expansion and urban sprawl, the city’s infrastructure has not managed to keep up with the expansion and this contributes to a number of challenges.

Common challenges experienced on a daily basis by most citizens living in the City of Accra range from crowded housing, limited access to water and sanitation facilities, and long periods spent in commutes. High population density, inadequate infrastructure and the unplanned nature of most parts of Accra also make the city susceptible to a number of natural and man-made disasters, such as floods – the threat of which will likely only grow with rising sea levels in the light of climate change - as well as fire outbreaks and collapsed buildings.

Floods are the tip of the challenge…

As the rainy season comes, the threat of flooding in a number of areas becomes real. Last year, the June 3 flood and fire disaster that killed more than 150 people at the Kwame Nkrumah Circle and caused deaths, injuries and destruction to properties in other areas, exposed the structural inadequacies of the city of Accra. It also tested the resilience of institutions and people to disasters.

In fact, the June 3 flood and fire disaster was a cap on the perennial flooding that had been hitting Accra. According to engineers, the poor planning of the city of Accra in terms of built infrastructure, the small nature of drains, the settlements along the water-courses which drain into the sea, and dumping of refuse into drains are the main causes of floods in Accra. In essence, human activities contribute immensely to the floods we experience in Accra. The sheer disregard for building regulations is evident in Accra as some of the houses are built on watercourses, which impedes the flow of rainwater and diverts the water into people's homes.

Apart from floods, Accra experiences frequent fire outbreaks in markets, government and private buildings. These fire outbreaks are mainly caused by bad electrical wiring system and the lack of maintenance of wiring systems, according to Mr Timothy Osafo-Affum, acting Public Relations Officer of the Ghana National Fire Service (GNFS). Accra has also seen a high incidence of buildings collapsing due mainly to structural defects, which lead to loss of lives and injuries. Following the collapse of the five-storey Melcom Shopping Centre at Achimota in November 2012, building experts have indicated that most structural failures can be attributed to man-made factors including lack of investigation of soil type, poor building design and planning, use of inferior or substandard building materials, weak supervision, use of incompetent contractors, and lack of enforcement of building standards and codes.

In the light of the current state of Accra, it is apparent that much needs to be done to make the city more resilient.

The good news is that search and rescue missions during floods are becoming better coordinated. For instance, NADMO engages in search and rescue operations using speed boats that have been secured to improve response time. When the flood is serious, the 48 Engineers Regiment of the Ghana Armed Forces comes in with more boats to intensify the operations. The police are also available to offer security - they cordon disaster areas to avoid chaos and looting.

Firefighters from the Ghana National Fire Service (GNFS) also provide assistance. The firefighters have special equipment to break walls to rescue people trapped in buildings. But firefighters face challenges. Blockage of some of the roads by containers compels fire fighters to add more hoses. Occasionally, they also face the unavailability of water in water hydrants.

It is worrying that only a few of the recommendations of the Committee for June 3 Disaster that was set up to determine how to prevent future occurrence of similar disasters were implemented. The only efforts made were the about 50 per cent clearing of the Odaw River and the scuttled attempt to ban the production of thinner plastic bags.

Little measures have been taken towards creating the community police, equipping disaster managers with requisite tools and procuring air ambulances and helicopter firefighters as recommended by the committee.

In recognition of cities as the lifeline of today's society, the United Nations Office for Disaster Risk Reduction (UNISDR) launched a global campaign that seeks to support sustainable urban development by promoting resilience activities and increasing local level understanding of disaster risk.

In order to find an answer to some of the questions raised above, to leverage the campaign and contribute to the achievement of resilient and sustainable urban communities, the United Nations Development Programme (UNDP), in partnership with NADMO, will organise a multi-stakeholder platform meeting in Accra on 14-15 July 2016. The meeting will discuss and advocate for inclusive and resilient urban development in Ghana, in general, and the Greater Accra Metropolitan Area (GAMA) in particular. The two-day meeting aims to advocate for disaster preparedness and risk reduction on the theme: "Making Cities Inclusive and Resilient in Ghana: The Case of GAMA."

The Accra meeting is to raise awareness of the social and economic impacts of common disaster events, particularly on vulnerable groups and locations in GAMA and to advocate for the need to incorporate not only a disaster-risk reduction and resilience focus in planning, particularly in the context of the masterplan being developed for GAMA, but also to ensure linkages with social, economic and environmental sustainability.

Furthermore, it aims to foster better understanding of ongoing initiatives for inclusive, safe, resilient and sustainable urban development in GAMA, the key challenges and institutional coordination mechanisms. Besides, the meeting has the objective to highlight the critical link between governance mechanisms and urban vulnerability/resilience and to foster the commitment of Ministries, Departments and Agencies (MDAs) in GAMA to promote inclusiveness and safety of vulnerable urban and peri-urban populations.