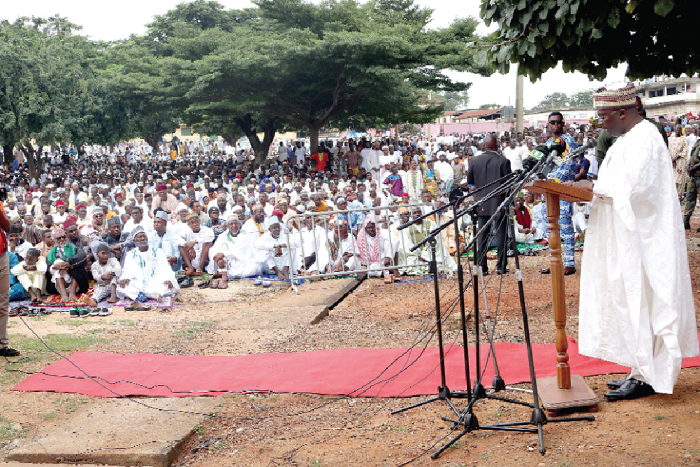 The Vice-President, Alhaji Dr Mahamudu Bawumia, has advised Muslims to refrain from indiscipline and other negative attitudes that will derail national cohesion and thwart national development as they celebrate Eid-ul-Adha.

He said the celebration presented an opportunity for all to reflect and rededicate themselves to Allah and focus on strengthening the unity of purpose that existed among people of different faiths.

Dr Bawumia was addressing a large number of Muslim faithful who gathered at the Ashanti Regional Central Mosque at Aboabo in Kumasi to mark Eid-ul-Adha.

He presented 30 bags of rice and 600 crates of Coca Cola, two cows, one ram and 30 crates of bottled water to the people for the celebration.

Dr Bawumia commended the people of the Ashanti Region for co-existing, irrespective of their religious faiths, a situation he described as gratifying because the harmonious relations between Muslims and Christians had led to the enviable peace the country was enjoying.

Touching on the Eid-ul-Adha celebration, the Vice-President said the feast of sacrifice was an important date on the calendar of every Muslim because it was a time to honour the willingness of Prophet Abraham to sacrifice his son to Allah as an act of submission.

He explained that the occasion was a period for Muslims to learn the values of self-denial by sacrificing all that they had to Allah, continue to submit themselves to Allah and shun vengeance and other forms of indiscipline.

He further called on Muslims and the followers of other faiths to rededicate themselves to the relationship that had existed between them and the government over the years, adding that religious organisations and the government had a common interest of promoting the well-being of the Ghanaian.

Dr Bawumia urged Ghanaians, irrespective of their political affiliations, to support President Nana Addo Dankwa Akufo-Addo in his effort to improve the standard of living in the country.

The Asantehene's Nsumankwaahene, Baffour Domfe Gyeabuor III, who represented Otumfuo Osei Tutu II at the event, expressed worry at the increasing rate at which indiscipline was growing in the Zongo communities and urged the leaders to help change the trend.

He also made mention of the indiscriminate riding of motorcycles without recourse to road safety regulations, a situation which often- times led to accidents in which people were injured or killed.

He took a swipe at the leaders of the Central Mosque for failing to mobilise funds to cement the dusty surroundings and expressed worry that the Vice-President had to walk on the dusty compound to the prayer grounds which was partly dusty.