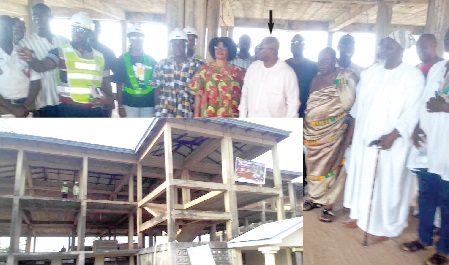 Akwasi Acquah (arrowed), the MP for Oda; Victoria Adu (5th from left), the MCE, and the staff of Setalexidan Company Limited, at the first floor of the abandoned building. INSET: The front view of the three-storey office accommodation building
30.5k Shares

A three-storey office accommodation for staff of the Birim Central Municipal Assembly started by the National Democratic Congress (NDC) administration over 20 years ago, which has been abandoned by successive governments, has been reactivated and awarded on contract by the current New Patriotic Party (NPP) government.

Through the efforts of the Member of Parliament (MP) for Akyem Oda, Alexander Akwasi Acquah, the Common Fund Administration has awarded the project on contract to a Kumasi-based construction firm, Setalexidan Company Limited at a cost of GH¢4,430,299.65.

The contract, which should be completed in seven months, involves the reconstruction and reroofing of the entire building, tiling and furnishing of the offices.

At a ceremony to hand over the project to the contractor at Oda last Friday, Mr Acquah advised the contractor not only to complete the building on schedule, but should also do quality work for the facility to last long.

He appealed to the contractor to recruit some of the youth in the area to reduce the unemployment problem in the municipality.

He was grateful to the NPP government, in particular, and the Common Fund Administration, in general, for investing heavily to complete the facility that had been neglected for years.

He called for closer cooperation between MPs and Metropolitan, Municipal and District Chief Executives nationwide to speed up the progress of the country.

The MP urged public servants to bury their political affiliations and contribute their quota towards the national reconstruction programme, spearheaded by the governing NPP government.

He stated that feasibility studies had been completed for the Common Fund Administration to reconstruct the Oda Central Market that was destroyed by a fire disaster last year.

Mr Acquah gave an assurance that the Oda town roads, whose rehabilitation had come to a standstill, would soon be repackaged and re-awarded to a new contractor for tarring to bring relief to the residents.

The Municipal Chief Executive (MCE) for Birim Central, Victoria Adu, commended the MP for lobbying for many development projects to be undertaken in the municipality since he became the legislator for a short period of two years.

She said the completion of the three-storey building would help solve office accommodation facing some of the decentralised departments in the municipality.

The Managing Director of the construction firm, Jackson Agya Manu, gave an assurance that he would complete the facility on schedule and also execute it to the satisfaction of all.

Among the dignitaries at the function, chaired by Nana Akyea Mensah III, a divisional Chief of Akyem Kotoku Traditional Area, was the Oda Congo Chief, Alhaji Sulemana Ademu.