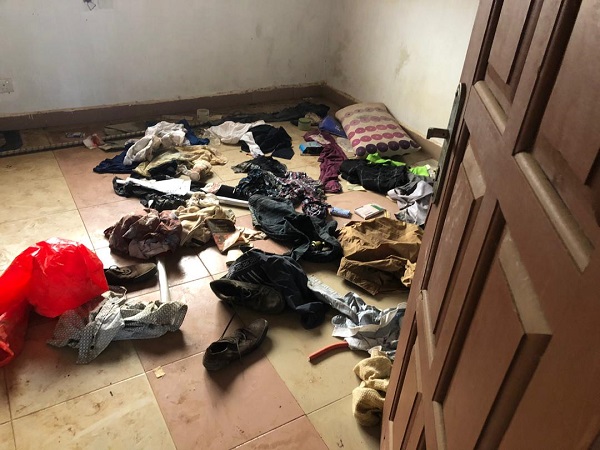 Co-tenants in the house where Samuel Udoetuk-Willis, a 28-year-old at the centre of the suspected kidnapping of three Takoradi girls, have described him as very discreet and reserved.

They say Udoetuk-Willis was hardly seen in the house except briefly on Sundays, although he was cooperative as he paid his bills and carried out his other obligations towards the house as a tenant.

The Daily Graphic’s rare peep into the home of the suspect at the now famous Kansaworodo community in the Sekondi-Takoradi twin-city last Saturday proved an intriguing experience and insight into the background of the man who has been held as prime suspect in the case of the three girls who went missing between August and December last year.

Apart from the co-tenants who admitted knowing him as a member of the house, other people in the neighbourhood had no idea he lived in the area.

Police retrieve remains suspected to be that of missing Takoradi girls

“We are all tenants, and are entitled to our privacy. However, as tenants we see one another almost on daily basis, but before we are up in the morning, Udoetuk-Willis is off and we hardly see him.

He was in the house with a certain lady who later left and we did not see her again until the issues came up,” a co-tenant who spoke on condition of anonymity said.

Udoetuk-Willis, a Nigerian, was one of the tenants at the home located on a hill of a new developing community at Kansaworodo.

The building was at the upside of an uncompleted house in an area called Block Yard.

The house, with four self-contained bedrooms, has two entrances; one through the uncompleted house and the other through the main entrance which has a metal gate facing the rough road off the Kansaworodo-Mampon road.

In the house itself, Udoetuk-Willis’s apartment is a single room, which is not part of the main building. He converted the doorway into a kitchen.

Inside the single room, he has his sleeping area without a bed but pillows, a place for his clothes and a toilet and bath.

His clothes were scattered on the ground, his remaining toiletries and packs of medications remained on the floor.

Beyond the house, most members of the community — which is sprawling with many uncompleted structures and other scattered completed properties — told the Daily Graphic that until his arrest, they had barely seen the suspect in the area.