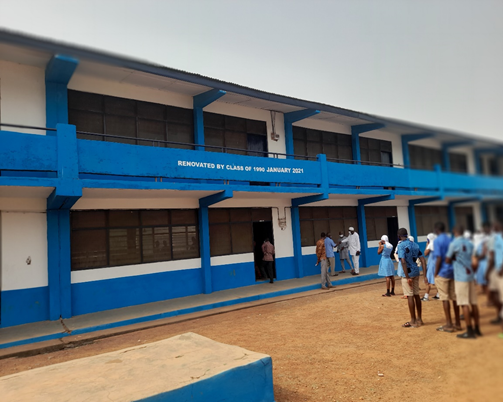 The 1990-year-group of Yendi Secondary School Old Students Association (YESSOSA) has renovated a 12-unit classroom storey building for the school.

The building, which is popularly known as Cambridge Block, was in a deplorable state and not conducive for effective teaching and learning.

Following an appeal made by the Headmaster of the school during the launch of the school’s 50th anniversary celebration in 2019, the old boys and girls took up the challenge to put the Cambridge Block back in a good shape.

Speaking at a short ceremony to hand over the renovated facility to the school, the Deputy Director of Education in charge of Human Resource, Mr. Mohammed Habib Ibrahim, entreated the school management and the students to take good care of the building so that the benefit of the investment made by the old students can last for several years.

The Chairman of the Board of Governors of Yendi Senior High School, Bindana Ayuba Ahmed Ziblim, expressed his gratitude on behalf of the school to the 1990-year-group.

He encouraged other year groups to emulate the achievement of the 1990-year-group by also adopting other projects that needed renovation to help beautify the school and make teaching and learning conducive.

Speaking on behalf of the old students, Dr Abdulai Abukari said the old students are committed to contributing their quota to ensure that teaching and learning happens in a conducive environment at the school.

He appealed to the students to reciprocate the sacrifices their predecessors have made by living disciplined lives and learning hard to perform well in their final exams.

He also appealed to the teachers to put in their best despite the limited resources, urging the students that “It is my hope that in the future you also get the opportunity to stand here as old students of the school and talk to students.”

The General Secretary of YESSOSA Mr. Salifu Bawa thanked the 1990-year-group for the good job done and indicated that other year groups have taken up various projects at the school.

The Head Master of the School, Chief Alhassan Mustak Hussein, expressed his gratitude to the 1990-year-group and other year groups who have so far supported in reshaping the school.