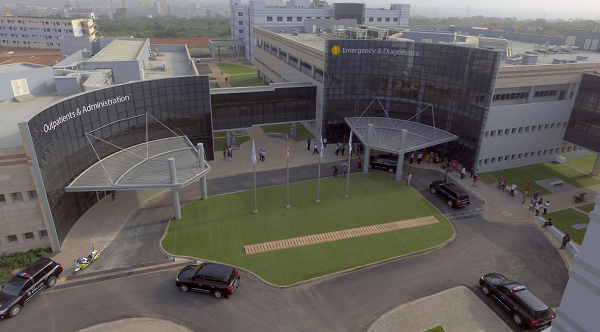 One year after the University of Ghana Medical Centre (UGMC) at Legon had been inaugurated, the multi-million dollar facility is yet to become operational.

This is because the Ministry of Health (MoH) is carrying out due diligence on the facility and how it will be managed.

As part of measures to open the facility to the public, the Minister of Health, Mr Kwaku Agyemang-Manu, last week met with members of the interim management board of the centre to bring him up to speed on the status of the facility and how best to move to ensure a smooth take-off.

In an interview with the Daily Graphic yesterday, the Public Relations Officer (PRO) of the MoH, Mr Robert Cudjoe, dismissed speculations that there was a tussle between the ministry and the university authorities as to who should be responsible for the management of the centre.

Apart from ensuring that the right things were done before the centre became operational, he said, the ministry was taking a second look at the human resource required to manage some of the sophisticated facilities.

According to him, the MoH inherited a lot of health projects, including 300 community-based health planning and services (CHPS) compounds and seven district hospitals which were at various stages of completion.

The first phase of the UGMC was expected to be fully operational by July this year.

The project was funded with a loan facility from Israel, with counterpart funding from Ghana. It was executed by Messrs Engineering and Development Consultants Limited, with medical consultation provided by the Sheba Medical Centre.

The super-tertiary or quarternary facility, which is an extension of tertiary care in reference to advanced levels of medicine, will also provide training and research.

The project is expected to have a phase two to add 350 beds to the facility.

The second phase will provide specialist facilities, including a heart centre, a cancer treatment centre, a rehabilitation centre and a hotel for families of patients.