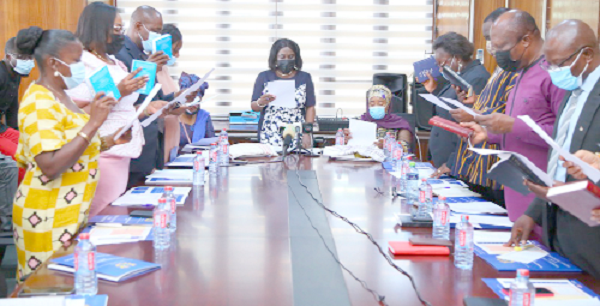 The Caretaker Minister for Gender, Children and Social Protection (MoGCSP), Mrs Cecilia Abena Dapaah, has inaugurated three boards to oversee the work under the ministry.

They are the Human Trafficking (HT) Management Board, the Domestic Violence Board and the Central Adoption Authority Board.

Among other key duties, the HT management board is to deal with any matters concerned with human trafficking.

The 15-member Domestic Violence Board, which is to help protect people from gender-based violence, is chaired by the Deputy Minister for MoGCSP, Ms Lariba Zuweira Abudu.

The board is expected to advise the minister on policy matters under the Domestic Violence Act.

It is also to link government agencies and organisations to promote the rehabilitation and re-integration of victims of domestic violence among others.

For its part, the nine-member board of the Central Adoption Authority is to ensure best adoption practices in the country.

The board, which is chaired by the Chief Director of the Ministry, Dr Afisah Zakariah, has been tasked to ensure that current reforms in the adoption process in the country are sustained by putting in place pragmatic measures that will encourage a continuous post adoption monitoring of adoptive families for both in-country and inter-country adoption.

Mrs Dapaah, in her inaugural address, tasked all the board members to collaborate effectively in developing effective strategies that would benefit all citizens.

She urged board members to work hard to ensure that no one was left behind in the developmental agenda of the country.

In inaugurating the HT Board, the minister said issues of cross border sex trafficking, labour exploitation, child abuse, child labour among others were all areas that needed to be addressed.

She called on the members of the board to ensure that victims were protected whereas the incidence of human trafficking was reduced to the barest minimum.

To the DV Board, she said they were expected to make recommendations for a national plan of action against domestic violence, monitor and report progress of the National Plan of Action against DV.

She encouraged the members to show commitment in their work to enable the country to effectively deal with DV in the society.

To the Central Adoption Board, the minister charged them to help develop policies and programmes that would promote the well-being and best interest of vulnerable children in the country.