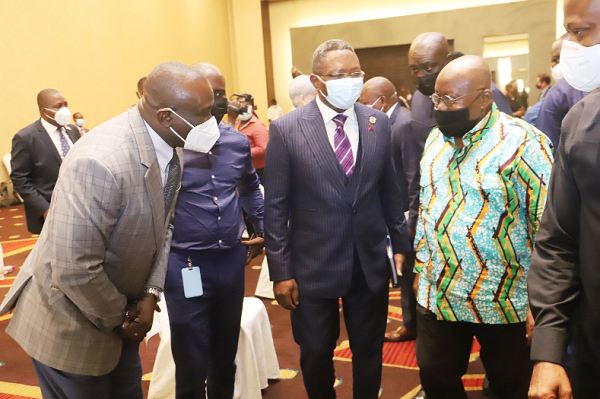 President Nana Addo Dankwa Akufo-Addo interacting with some stakeholders at the forum.

President Nana Addo Dankwa Akufo-Addo has launched a new round of the Global Fund Grant which will make available $204 million to support the country’s efforts to deal with malaria, HIV/AIDS and tuberculosis (TB) in the next three years.

President Akufo-Addo gave an assurance that government would also bolster the investments made by the Global Fund by fulfilling its counterpart financing of $45 million over the period to ensure that the grant, New Funding Model Three, was implemented in Ghana.

At yesterday’s launch in Accra, the President said the government was working to increase domestic financing to ensure Universal Health Coverage for all.

Ghana, the first recipient of the Global Fund, has received disbursements from the fund to the tune of $804 million since 2002.

From the investments, the fund is expected to support Ghana to achieve 85 per cent reduction in HIV incidence, and zero discrimination for marginalised groups to access care, support and treatment under what is called 90-90-90 target.

President Akufo-Addo said the new funding model, which would accelerate progress towards the realisation of the 17 Sustainable Development Goals (SDGs), was expected to achieve lower morbidity and mortality in malaria, HIV and TB, as well as strengthen the entire healthcare system.

He said with the fund, Ghana would be able to continue with the programme to eliminate HIV, malaria and TB, and also build health structures that were beneficial to deal with other chronic infectious diseases.

President Akufo-Addo stated that it would also help expand detection of TB cases and TB treatment, and construct an in-patient facility in the management of drug-resistant TB patients at Nsawam.

He noted that the malaria grant, on the other hand, would increase the coverage of distribution of insecticide-treated nets, scale up seasonal malaria chemoprevention for children from the five regions in the north, and would now include children from Oti and Bono East regions.

The President explained that Ghana would be able to place at least six districts on the path to malaria predetermination, and charged the Ministry of Health to continue to maintain oversight responsibility over the grant and work with stakeholders to ensure that the processes and controls for the quality of service to be provided for the three diseases were improved.

He said key to the efficient performance of these grants was the provision of skilled human resource, for which government was committed to providing, adding that government employed 58,191 health workers in 2020 alone to boost the human resource base of the sector.

President Akufo-Addo said Ghana appreciated the COVID-19 related support offered by the fund for testing and the procurement of personal protective equipment (PPE), insisting that previous support from the fund had enabled Ghana to deploy antiretroviral therapy and TB e-track which were essential in ensuring accurate and appropriate data and documentation, and the sensitive quality health delivery.

He explained that the fund also supported the supply chain system for the programme that had helped to prevent avoidable shortages at regional level using the Ghana integrated logistics management information system.

The President added that through the global funds investment in Ghana’s health sector, the country had the capacity to screen about 900,000 persons for HIV and offer them preventive services.

The Minister of Health, Mr Kwaku Agyemang-Manu, said the country was still battling with the COVID-19 pandemic, adding: “we are currently seeing active cases hovering around 2,000, and this represents a massive improvement”.

He said the government was making frantic efforts to vaccinate all Ghanaians so as to ensure that the country left no one behind the vaccination campaign.

The Divisional Head of the Grant Management of the Global Fund, Mr Mark Edington, speaking via zoom, commended Ghana for its response to the pandemic, for being the first recipient of the vaccine via the COVAX programme, and for its continued vigilance to contain and eliminate the threat.

He said in recognition of the need for additional investment, the Global Fund had already provided $16.5 million, and would shortly use the US government's generous contribution of $3.5 billion to offer $70 million in new funds to Ghana to support PPE, diagnostics, oxygen, community support, risk communication and logistics.