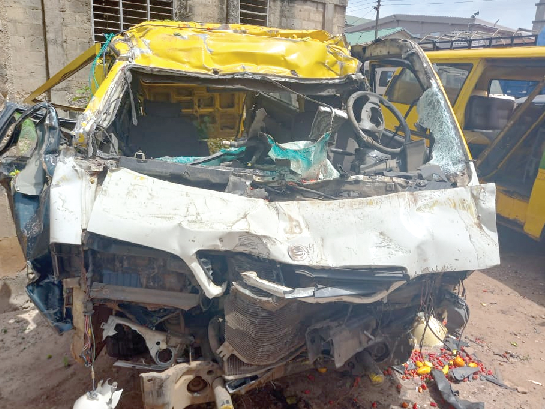 The mini-bus carrying the passengers and food stuff

A third accident within the Ashanti Region in three successive days has claimed two more lives at Tafo Pankrono, a suburb of Kumasi.

The casualties in the latest road accident bring to 28 the lives lost on the road in the region in three accidents in three days.

Some 20 people were killed in last Monday’s accident, while six were burnt beyond recognition in the second last Tuesday. Both accidents occurred at dawn on the Offinso-Akumandan stretch.

Seventeen people died in last Monday’s accident, but three more have since died from that accident.

The two persons who died in yesterday’s accident, which happened around 2 a.m., have been identified as the driver of the bus, Bashir Abubakar, 34, and Joyce Konadu, 50, a trader.

According to the District Commander of the Tafo-Pankrono Motor Traffic and Transport Department, Deputy Superintendent of Police (DSP) Boakye Sarpong, a mini-bus carrying vegetables from Attebubu towards Kejetia Market ran into a stationary Man Diesel truck around 2 a.m., killing the two occupants on the spot.

The driver of the abandoned truck, Yussif Shaibu, has been arrested.

The bodies have been deposited at the Ebenezer Mortuary in the area.

The death of three more children from the accident that occurred on the Offinso-Abofour road last Monday has increased the death toll to 20.

The accident, said to have occurred around 3:30 a.m. near the Abofour Forest, happened when the Man Diesel articulated truck veered off its lane and crashed into the bus.

A day after that incident, six persons were burnt to death, while 22 others got injured after a passenger bus ran into a towing truck at Akumadan in the Offinso District in the Ashanti Region.